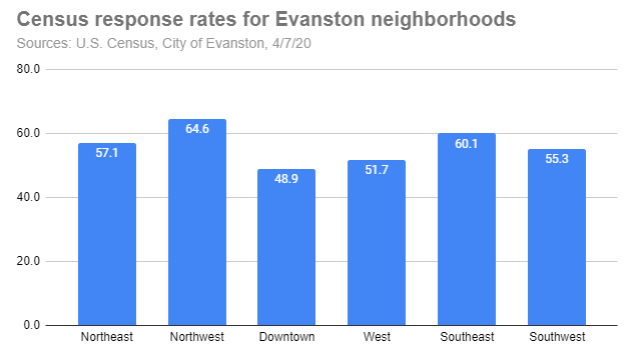 If you’re stuck at home because of COVID-19 and trying to come up with something to do, you might consider — if you haven’t done it already — filling out your U.S. Census questionnaire online.

So far, Evanstonians are responding at a higher rate than average for Illinois — 55.4% here compared to 50.4% statewide. But that still leaves a lot of folks uncounted.

There’s a substantial variation in response rates by neighborhood, as shown in the chart above. Those neighborhood identities are clusters of census tracts and were used by the city in reporting 2010 census results.

There’s a wider variation in response rates at the individual tract level — with census tract 8092 in the western portion of the 5th Ward showing the lowest response rate, 39.2%, and tract 8089 in northwest Evanston showing the highest rate, 67.1%. Not sure what tract you live in? The city has a census tract map available online.

The chart above, from NewsCounts, shows how the response rates by census tract have increased over time. And the Census Bureau is updating response rate data every day.

Getting an accurate census count is considered critical to make sure that Evanston and othere communities receive a fair share of federal funding over the next decade.

You can find instructions on how to respond to the census here.