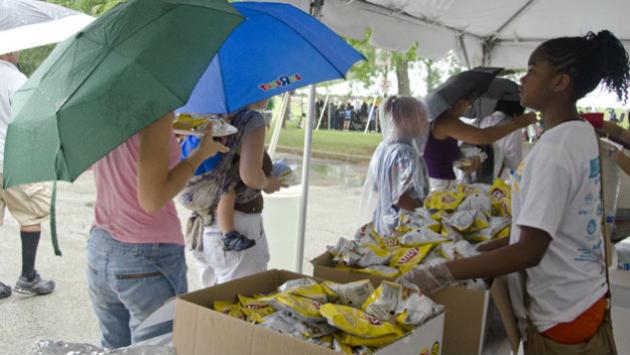 Even though Evanston received more than an inch of rain Sunday, most of it after noon, it failed to dampen the enthusiasm of patrons of the CommUNITY Picnic and the Taste of Armenia.

The picnic, at Ingraham Park behind the Civic Center, offered free food under a big tent, and a number of volunteers kept the event running as smoothly as possible.

The Evanston Ecology Center brought a few reptiles for visitors to pet, and St. Francis Hospital partnered with the Prevent Cancer Foundation to offer the Super Colon Exhibit.

Other activities included a dunk tank, the Chicago Mounted Police, a craft tent, face painting, library games, and a dude walking on stilts. 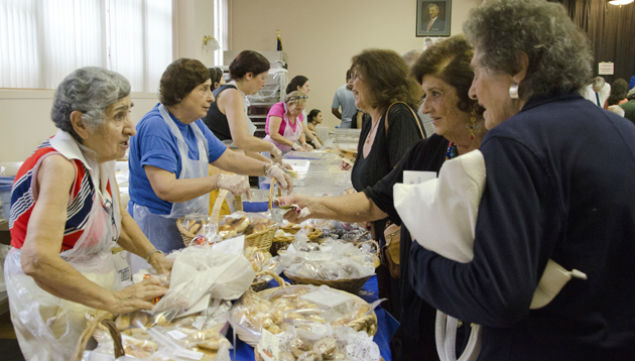 Top: Top: Umbrellas were the order of the day at the CommUNITY picnic at Ingraham Park. Above, Volunteers hand out food to patrons at the Taste of Armenia. Photos by Eileen Meslar.

Neither were parishoners at the St. James Armenian Apostolic Church about to let a little rain interfere with the fundraiser that typically provides a third of the funding for the church.

Though the dancing and band performance were cancelled,  the food, kids' games, and raffle continued on with a few minor adjustments.