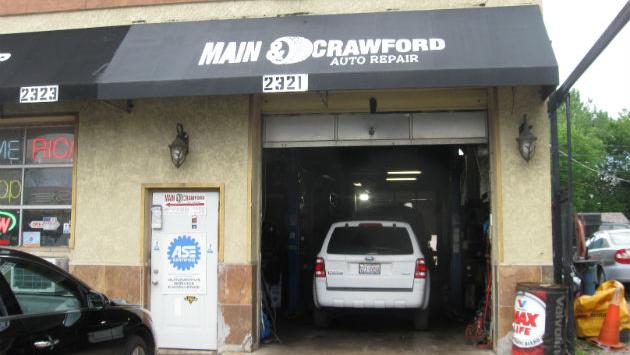 Paid Post: Even though the intersection of Main Street and Crawford Avenue is about a mile west of the Skokie/Evanston border, Main & Crawford Auto Repair is located a couple of blocks east of that border, tucked well inside Evanston.

And it’s rapidly become an Evanston institution, patronized by residents of both communities and owned by Agustin Lagunilla, known to his clients as Tino.

A native of Mexico, but a citizen of the United States, Tino represents the classic story of immigration in America, which some may contend is a major ingredient in what makes America great.

Tino, 44, crossed the Mexican border in 1994, seeking a better life in America. A skilled tuba player, he managed to earn a living by playing in Mexican bands, but saw a part-time opportunity in repairing automobiles for a shop in Chicago Heights, where he was living.

He found he had a natural talent for auto repair and learned of a fulltime opportunity in 2000 with Main & Crawford, which was actually located at that intersection in Skokie.

As is true with many Mexican immigrants to America, Tino worked long hours and mastered the technique of quickly and accurately diagnosing complex repairs such as automotive electrical systems and soon became the number one mechanic at Main and Crawford for 16 years.

He’s also developed a network of friends in the business that frequently call him for advice when they encournter difficutly troubleshooting a particular problem.

Then the shop’s owner suffered a back problem and elected to sell the business. He worked out a deal with Tino in 2016, but the deal did not include the Skokie location.

So Tino, who lives in Evanston, found a location across Main Street from the Food for Less gas station and moved the operation to 2321 Main St,, where it remains today.

Maintaining the Main & Crawford name was helpful, Tino feels, in keeping his existing clientele that patronized the shop when it was in Skokie.

He employs two people — Mike Lebovitz, a former nursing home administrator, to run the office, and another mechanic to assist him in making repairs.

Tino subscribes to a service, Mitchell, that specifies how much labor should be involved in virtually any repair situation. He gives each customer a copy of the Mitchell estimate, and Tino abides by the labor estimate in the Mitchell report, charging a flat $90 per hour for the work, even if the actual number of hours he spends on the vehicle exceeds the Mitchell estimate.

Therefore, the customer knows up front exactly what the labor cost will be for Tino to make the repair to his vehicle.

Tino, who has a wife and four children, looks upon his customers as his family and goes to great lengths to keep them satisfied.

For example, the former owner of Main & Crawford was Jewish and closed the shop on Saturdays, but kept it open on Sundays. When he purchased the business, Tino maintained that tradition and today it is one of a few auto repair shops in Evanston to be open on Sundays.