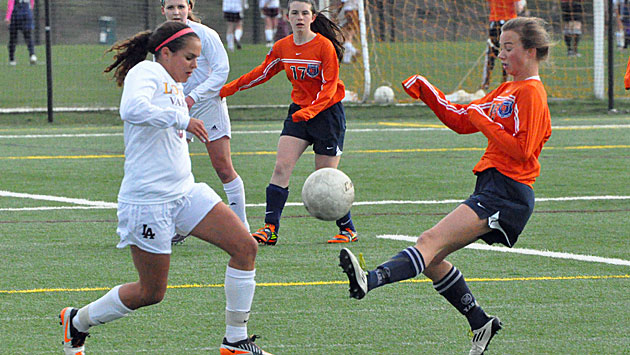 GLENVIEW – In playing a team of Loyola Academy’s quality, the Evanston girls soccer team knew it needed to almost flawless to pull off an upset.

Morgan Muno competes with Loyola's Tori Iatarola for a free ball during the first half of Thursday's match.

GLENVIEW – In playing a team of Loyola Academy’s quality, the Evanston girls soccer team knew it needed to almost flawless to pull off an upset.

Evanston's Anna Sippel battles a Loyola player for the ball.Specifically, the Wildkits knew they needed to emulate the standout play of the Ramblers’ backline, which hasn’t allowed multiple goals in a game since 2010, to prevent Loyola from seizing an early lead.

But less than 10 minutes into Thursday evening’s game, Loyola’s Margaret Walker got free in Evanston’s 18-yard-box and beat freshman goalkeeper Olivia Post to put the Ramblers ahead. A pair of difficult saves by Post kept Evanston close until Colleen McShane put the game out of reach with a goal near the midway point of the second half. 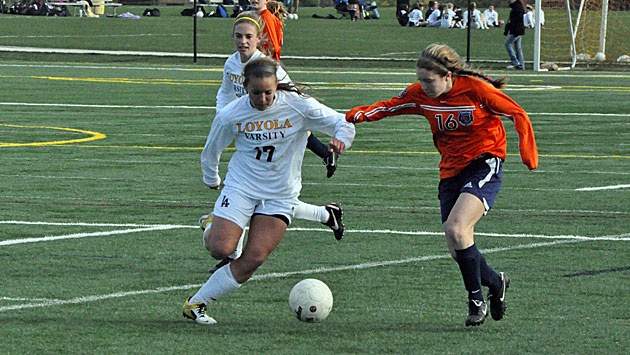 Evanston's Anna Sippel battles a Loyola player for the ball.

“I don’t think (Loyola scoring first) affected us too much because we still played with a lot of intensity after they scored,” Evanston coach Tasha Nemo said. “I just think it was a goal that should have never happened. We didn’t even lose our marks, we just let our marks do whatever they wanted. It was just real disappointing that they did score, but we kept up the intensity pretty much until the end of the game, which I thought was good.”

“I really think that got us going,” said McShane of the Ramblers’ first goal. “We’d been a little bit choppy at first and once Margaret put that in, we knew we had to settle down and play our game and keep it going.”

The Ramblers’ game is, essentially, to grab leads and then suffocate the opposition by holding possession and squashing their opponents’ offensive attacks with their defense.

Despite losing the lead within the first 10 minutes of Thursday’s contest, the Wildkits (3-3-1) didn’t get frustrated. They kept working and Jackie Donohue sent in a pair of dangerous crosses – one near the end of the first half and one soon after halftime – which tested Loyola’s defense.

The Loyola goalkeeper snared both crosses, however. 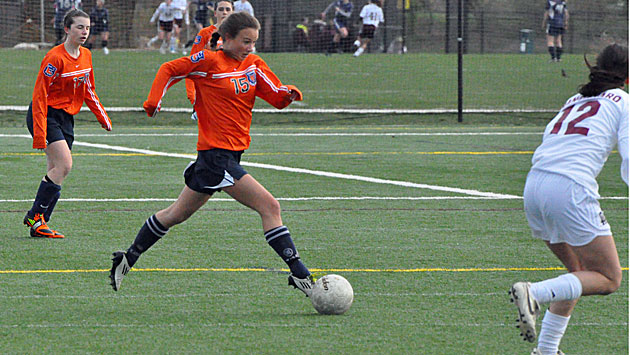 Morgan Muno dribbles up the field during Loyola's 2-0 win over Evanston.

Unlike Evanston, Loyola (6-0-1) was able to create a number of offensive chances. They had 13 shots on goal, including a pair of right-footed rockets by Tori Iatarola.

Post stopped both of Iatarola’s shots to temporarily keep Evanston in the game.

“I’m extremely pleased with her,” said Nemo of Post. “I knew watching her from afar she was going to be a great addition to the varsity. She’s very confident. She’s poised in the goal. She commands a lot of respect from our girls because they know how good she is. She had a lot of great saves for us today, I just kind of feel like we let her down defensively with our marking.”