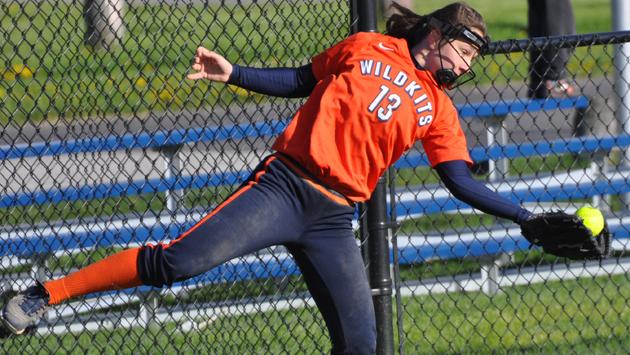 Behind a patient, powerful offensive attack and a 2-hitter by Jenna Ehrensaft, Evanston smothered Maine East, 20-0.

Evanston third baseman Maddie Reiches makes an accrobatic catch during the first inning of the Wildkits' victory over Maine East.

PARK RIDGE – A softball team primarily consisting of young players has the tendency to be anxious, especially at the plate.

Oftentimes a young team will stretch the strike zone for the opposing pitcher and, in the midst of a rally, over swing and end the rally prematurely.

Despite a starting lineup which includes seven underclassmen, the Evanston softball team stuck to its patient offensive approach against Maine East on Thursday. The Wildkits capitalized on Maine East starter Megan Mitchell’s lack of control by taking nine walks in the first inning and ran wild on the bases en route to eight first inning runs.

Evanston’s approach continued to be effective after the first inning and it resulted in a 20-0 stomping of Maine East in five innings.

“We were just waiting for our pitch and making sure we could hit it,” said Allie Nortz, who led Evanston with four runs scored. 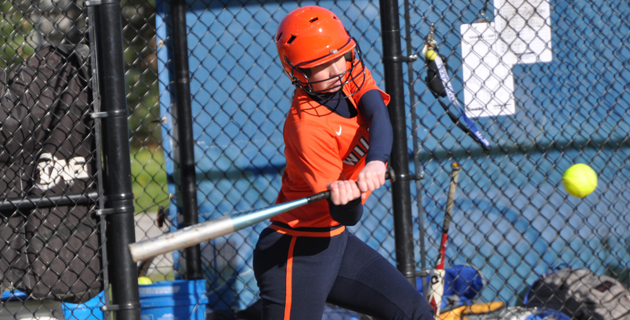 “Everybody on our team was really good team players,” Evanston coach Kristen Proffitt said. “Nobody was swinging at pitches that weren’t theirs. They were waiting and being patient for theirs and then putting their good swings on it, which is important because sometimes when you’re getting into a high-scoring game everybody wants to jump in and they want to have a big triple or home run. But nobody was doing that. If we would have been jumping around, trying to hit high pitches, low pitches we would have been making outs more often.”

Thirteen Evanston batters came to the plate in the first inning and the Wildkits (3-6) kept piling on the runs after the first, scoring five times in both the second and fourth frames.

With Maine East’s pitchers struggling to throw strikes, Evanston tried its best to avoid thinking about its expanding lead in order to make consistent swings at the plate.

“We have to make sure we keep our swings the same, because sometimes we end up slowing down,” said Jenna Ehrensaft, who threw a five-inning shutout and scored three runs. “We kept them nice and fast and just tried to adjust to the speed, which is hard sometimes.” 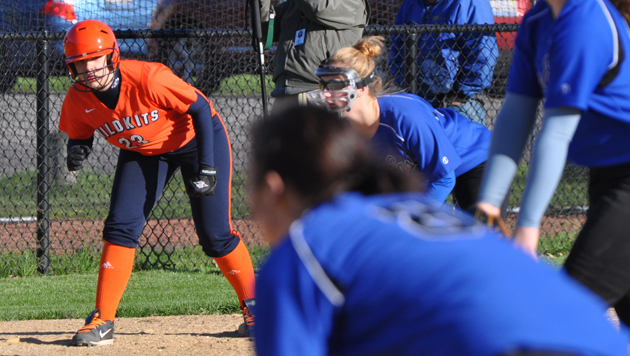 Emily Mathyer leans toward the plate.

With several long innings, including the first, Ehrensaft (5 IP, 2 H, 0 ER, 0 BB, 3 K) did her best to stay warm. She did so by continuing to move in the dugout and while on the base paths. Beyond the cold, she tried to block out her team’s sizable advantage.

“I just tried to keep warm up between innings – stay warm as much as I could,” Ehrensaft said. “Then we didn’t let ourselves get into the mindset of (watching) the score. We just tried to play.”

With such a substantial win in their only game this week, the young Wildkits move ahead hoping they can carry some of the momentum obtained Thursday into their conference season, which begins next week.

“We start conference next week,” Proffitt said. “I think our defense is looking really good. We started the season pretty slow. We have seven freshmen and sophomores who start, so we’re really young. We started off slowly, but I think we’re really making strides and can carry it over. Against Lane Tech we won 11-1 and now this game…”