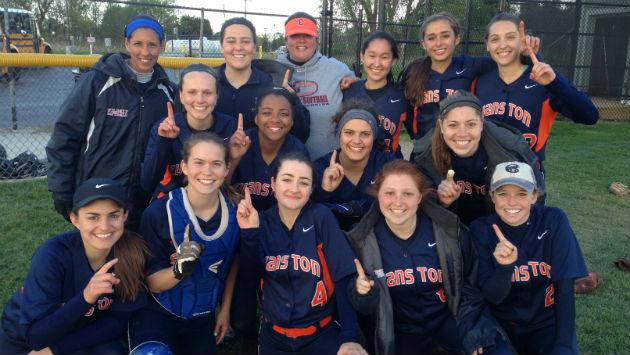 Some chapters in a history book take longer to write than others.

Evanston’s last title came in 1975, when the school was still a member of the Suburban League and only played 9 total games. The program was only in its 3rd year of competition at that point.

After that long wait, the Wildkits didn’t mind sharing the title. And they certainly knew how to pose for a championship picture — with index fingers displaying a No. 1 — in the post-game picture taken by ETHS Athletic Director Chris Livatino.

Maddy Managlia and Gina Hopf, the only two seniors on the Wildkit roster, combined to drive in 5 runs for the co-champs and winning pitcher Grace Elwood tossed 5 shutout innings in a distance performance.

Under first-year head coach Katie Perkins, the Kits also matched the school mark for wins in a single season while improving to 17-9. The 1990 squad finished 17-9 and the Wildkits have experienced only two winning seasons since  then  — until now.

“It feels great, it feels fantastic, but it’s all about the kids,” Perkins said. “They played fantastic today. There’s a big, competitive spirit with these kids and they showed up when it counted. First place is first place, even if it’s a tie. We were competing to stand alone yesterday (in a slaughter rule loss to Maine South) but yesterday just wasn’t our day.

“After that game we talked about the mental part of the game. I told them I don’t care that we came out and got creamed by Maine South, that now it’s done and we have to move on.”

“It’s been a long time coming,” agreed Managlia, who went 2-for-4 with two runs scored and three runs-batted-in. “It will be hard for Gina (Hopf) and I when we have to leave here, but it’s also nice knowing there’s so much hope for the future now with the players we have coming up.

“We’ve always been a team that COULD be here (as championship contenders), and that’s all. But  these  young  players  play  hard  and they’re ambitious and they NOT familiar with losing. They have a different mindset. Coach Perkins has told us from the start of the year that we can win if we believe we can win.”

Hopf, limited now to designated player duties after suffering a broken finger last week, ripped a 2-run double down the left field line to highlight a 3-run uprising in the first inning. Managlia’s two-out single scored Meg Eisfelder in the 2nd to boost the advantage to 4-0.

The visitors capitalized on three Niles West errors and a two-run double by freshman Lucy Hart to the opposite field to make it 7-0 in the 5th. They delayed their own championship celebration by tacking on 6 more runs in the top of the 7th as Caroline Job, Eisfelder and Managlia delivered run-scoring hits, all of them coming after 2 outs.

In the circle, Elwood allowed only 3 harmless singles over the first 5 innings. The sophomore right-hander allowed 4 runs over the last 2 frames, including a solo home run by West’s Leah Steinfeld. Elwood struck out 4 in the distance effort.