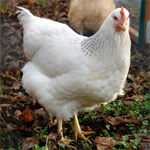 The New York Times says a study of eggs produced by backyard chickens in New York neighborhoods found that nearly half of them contained measurable levels of lead.

Health officials in New York say they're not sure how to interpret the results of the study–because there are no established limits in the United States for lead in eggs. A health department spokesman says it generally supports home chicken raising — but also seeks to reduce lead exposure.