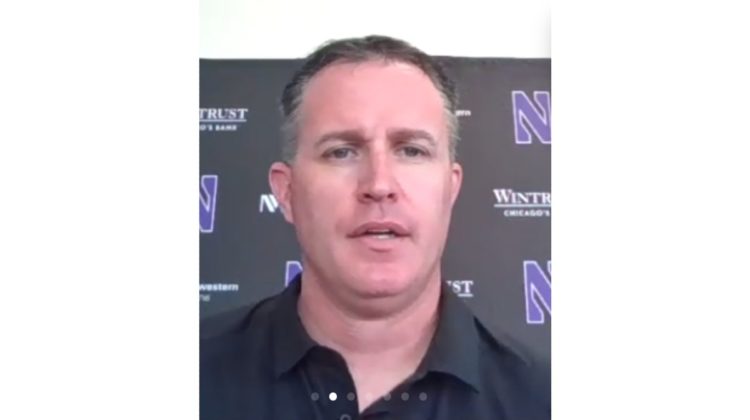 In an online news conference this morning, Fitzgerald said today’s focus was on “the guys we’ve got here,” but added he would have a release at some point “on guys that have decided to opt out.”

No names were given today, but the coach said, “We fully support them and their decision. It’s for a myriad of reasons, and so you work with that.”

Fitzgerald was asked about football-specific questions, such as the quarterback competition, as well as how the pandemic may impact the Wildcats this season, which now begins Oct. 24 in a home game against Maryland.

“The virus and the pandemic are real,” Fitzgerald said. “We have put policies in place and have to be ready to adjust.”

Fitzgerald said he has been monitoring how other conferences which have already resumed play are doing. Several major college football teams, such as Notre Dame, Virginia, Virginia Tech and Baylor have already had games postponed due to COVID outbreaks.

Fitzgerald said he has ideas on why some of the postponements have happened, more than the general public may know, and he will discuss those issues with his Wildcat players as they get closer to game days.

While some of the other major conferences have bye weeks where postponed games might be made up, the abbreviated eight-game regular Big Ten season has no breaks. Fitzgerald said he understands any Big Ten game that’s canceled will be recognized as “no contest,” and will not count as a forfeit against the team whose COVID outbreak led to the game being called off.

Fitzgerald said the Wildcats are wearing masks at practice, and he is even wearing a face shield. Social distancing is practiced as part of “the new normal,” and there has not even been a full-team meeting in the auditorium. “We want to be able to keep our guys as healthy as we can,” he said. “Whatever doc says, we execute.”

So far, Northwestern has not had any players coming down with COVID-19 although there was a false-positive scare earlier this summer. “We are all working hard to make great choices” in personal behavior away from the practice field, the head coach stated. “I’m proud of our guys,” he added.

Other than players’ family members, the Big Ten is not allowing fans at games this season. “It will be a little different without fans in the building,” Fitzgerald said. The coach said he’s been watching other college games on TV. Some teams, he said, looked excited to be there. “Others,” he said, “looked like they were getting a root canal.”

The Wildcats, he said, will “bring their own juice,” their own excitement, even if Ryan Field or a road stadium is empty.

Fitzgerald said while plans will likely have to be tweaked as the season progresses, there is a structure on what to do. “What happens if I get the virus and can’t coach for two weeks?” he said. There are plans in place if that happens, or if an assistant coach becomes ill.

While dealing with health and safety plans, of course, Fitzgerald is also dealing with the opener against Maryland, and the rest of the Big Ten season as well. And seeing as how that season had been cancelled, then reinstated, Fitzgerald said, “I feel like we’re 1-0 right now getting back out there to practice.”