Alderman Elizabeth Tisdahl, 7th Ward, says the NU’s associate vice president for facilities management, Ron Nayler, told residents at a Sheridan Road stakeholders meeting last week that the university may eliminate the pedestrian and bike path along the south end of the lake shore side of the campus when it constructs the new music building.

The new building is to be built just south of the Regenstein Hall of Music on the campus.

The music school itself is soon to be renamed for retiring university president Henry Bienen and his wife.

Tisdahl said Evanston residents enjoy the access to the lake and the safety of being able to walk or ride along the shoreline, rather than having to deal with heavy traffic along Sheridan Road. 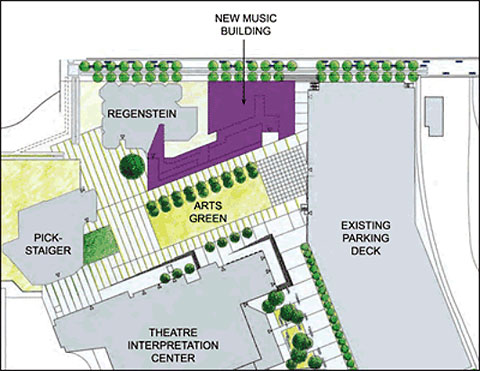 This NU map, released when plans for the new music building were first announced, is oriented so that the top of the map faces east.

Nayler has not returned a call seeking comment on the report, but university spokesman Charles Loebbaka stressed that plans for the new music building are very tentative — that the school hasn’t even hired an architect to design the building yet.

He said it’s possible that the design of the building might have an effect on the bike path, but that no decision about that has yet been made.

Currently the path branches off from the city-owned bike path at Clark Street beach and winds east past a university parking deck and the school’s boat house before turning north past the Regenstein and then east across a bridge over the lakefill campus lagoon and onto the park-like area between the lagoon and the lake.

Northwestern music school to be named for Bienens