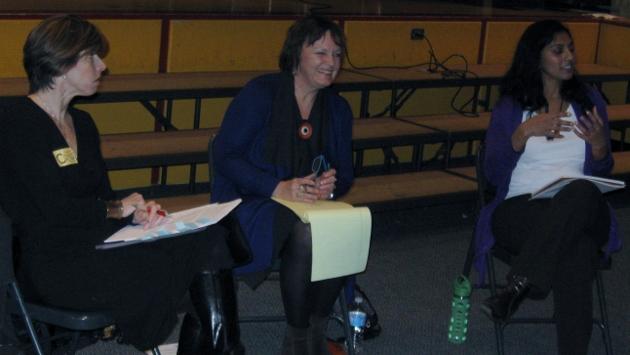 Due to an unfortunate quirk in scheduling, only 14 voters and three of the four candidates in the race for the Evanston/Skokie District 65 School Board showed up Monday night for the first candidates forum preceding the April 9 election.

The three candidates who appeared at Kingsley Elementary School for the event, sponsored by the PTA Council, were Candance Chow, Claudia Garrison, and Sunith Kartha.

But the missing candidate, incumbent Tracy Quattrocki, had a good excuse. She was at the regular monthly meeting of the District 65 School Board that was going on at the same time just a few blocks away.

At the meeting of the School Board in District 65 headquarters on McDaniel Avenue, Board President Katie Bailey apologized for the scheduling snafu, as the board meeting was originally scheduled for last week but was postponed a week because she, Bailey, could not make it.

Meanwhile, at Kingsley, the three candidates brought their notes and water bottles down from the stage, sat in front of the small group, and conducted an informal conversation about issues such as differentiation of instruction and long-term financing of the schools.

But tonight, all four candidates are expected, along with the eight contenders for the Evanston Township High School District 202 race, for a D65 & D202 Candidate Roundtable co-sponsored by the Youth Organizations Umbrella, the Evanston Coalition on Latino Resources, and Family Focus.

Tonight’s meeting will be at Grace Lutheran Church, 1430 South Boulevard, beginning at 6:30 p.m.

Despite the low turnout, however, the District 65 race is not in doubt, as voters will be asked to select the four to take the four spots on the board that need to be filled.

Top: Chatting informally about school issues at the Kingsley Forum are, from left, candidates Chow, Garrison, and Kartha.