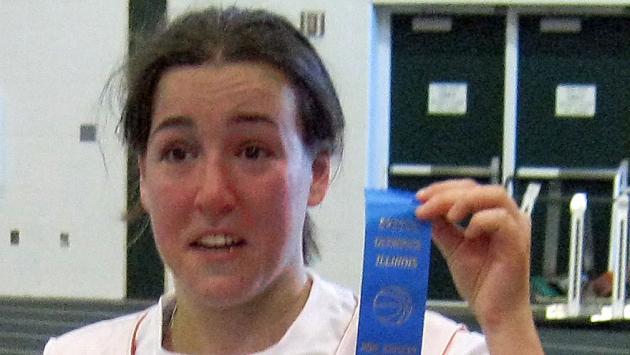 After each game, officials choose one athlete from each team who has displayed good sportsmanship, leadership and has promoted the true “Spirit of the Special Olympics Games” through his/her actions.

It is very rare for a player to receive the Spirit Award in both games because the award guidelines state that athletes are eligible to win the individual game award only once during the tournament.

Evanston Special Recreation has two Special Olympics basketball teams with a total of 20 players. The teams have been practicing and playing through the City of Evanston Recreation Division program since 2008.

Both teams qualified for the state basketball tournament for the first time by winning gold medals in the District Basketball Meet held on January 16. Both teams were awarded Bronze Medals at the State Basketball Tournament held in Bloomington-Normal on March 12-13.

On Saturday, March 19, 16 members of the Evanston Special Olympics Team competed in the Special Olympics District Swim Meet held at Lake Forest College in Lake Forest. Each of the athletes swam in two individual events and also swam as part of four, 4-person relay teams.

Of the 16 athletes competing in the meet, 12 won at least one gold medal. All gold medal winners automatically qualify to compete in the Summer State Games in Bloomington, Illinois, to be held June 10-12.

The athletes practice and compete through the City of Evanston Recreation Division program.

Above: Caroline Colianne shows off the first of the sportsmanship awards she won during the state basketball tournament.