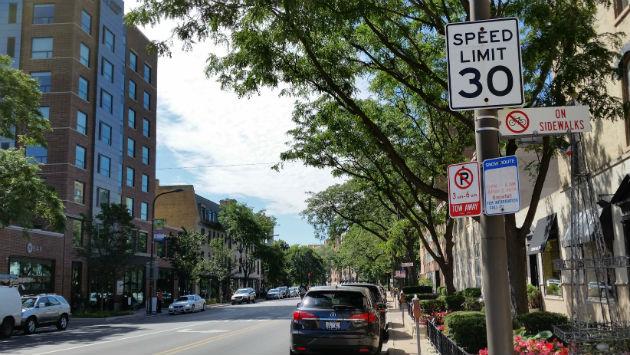 Evanston aldermen Monday night are expected to approve an ordinance reducing the speed limit on Chicago Avenue from Dempster Street to Sheridan Road from 30 to 25 miles per hour.

The change is being advocated by Alderman Judy Fiske, whose 1st Ward includes portions of the affected roadway. She’s asked that aldermen both introduce the measure and give it final approval Monday.

In August 2012 aldermen reduced the speed limit on Chicago Avenue between South Boulevard and Dempster Street from 30 to 25 miles per hour.

It appears that action was misinterpreted when it was incorporated into the city code. The code’s text now only authorizes 30 mile per hour travel on Chicago Avenue between Howard Street and South Boulevard.

The proposed action Monday would bring the city’s ordinances in line with what the city code already says.

The move would continue a trend to lower speed limits on major streets in Evanston.

Aldermen late last year reduced the speed limit on Dodge Avenue from 30 to 25 miles per hour.

Aldermen also voted last fall to reduce the speed limit on all of Sheridan Road to 25 miles per hour, but then learned that the stretch of Sheridan from the south city limit to South Boulevard was under state control and not subject to the city’s jurisdiction.

The amended language they approved, as submitted to the city code codifiers, reads that the Sheridan speed limit shall be 30 miles per hour from “City limits south to South Boulevard.”

With the Sheridan Road reduction, only two north-south routes through Evanston remain with speed limits higher than 25 miles per hour —  Ridge Avenue and the combination of Asbury Avenue and Green Bay Road.

In 2012 aldermen reduced the limit to 25 on Oakton Street and a portion of Central Street.

That leaves several east-west streets — Howard, Main, Dempster, Church, Emerson and Central — with 30 mile per hour speed limits for portions of their length, but all those limits are reduced as the streets get closer to the lake.

Editor’s note: This story has been updated to clarify the status of Sheridan Road.