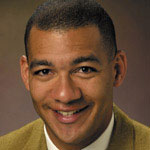 ESPN sports columnist and Northwestern University alumnus J.A. Adande will return to the Evanston campus, Friday, Oct. 26, to serve as grand marshal of the University’s 2012 Homecoming parade and pep rally.

Adande, who graduated from the University in 1992, will be among thousands of Northwestern alumni coming back to Northwestern for Homecoming weekend Oct. 26 to 28.

Well-known to sports television audiences, Adande — who covers the National Basketball Association — has appeared as a panelist on ESPN’s “Around the Horn.” In more than 800 appearances he has debated the hottest sports issues of the day with other sports reporters.

Born and raised in Los Angeles, Adande got his start in sports journalism at Northwestern’s student newspaper, The Daily Northwestern. He went on to cover Big Ten basketball for the Chicago Sun-Times and the Washington Bullets and college sports for the Washington Post before working as a Los Angeles Times sports columnist from 1997 to 2007. He joined ESPN.com as a senior writer in 2007.

This year, the student-run Homecoming committee has selected “Let the Good Times Roar” as the parade’s theme. The committee is encouraging student groups and community organizations to participate in Northwestern and/or “good times” themes for their parade floats.