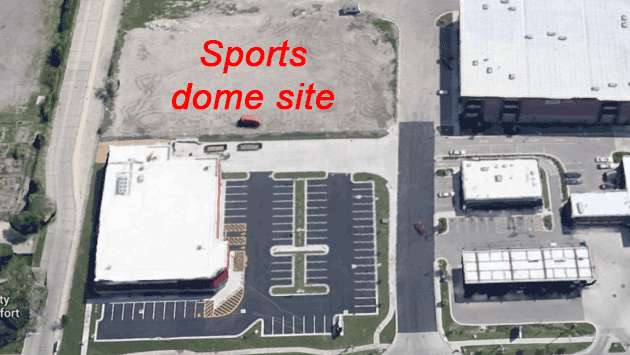 That big vacant lot behind the GFS Marketplace store on Oakton Street in Evanston could soon sprout a major new indoor recreation facility.

A plan for a 68,000 square foot privately-owned sports dome structure on the property is working its way through the city's approval process. 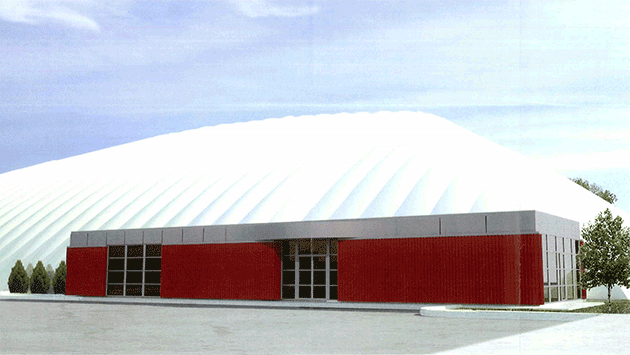 A rendering of the dome and its entry area, looking east from the parking lot.

The air-tight dome structure is planned to include a 200 x 325 foot multi-purpose play surface that could be divided into multiple fields for soccer, lacrosse, tennis, indoor baseball, indoor golf and other sports activities.

According to a weekly report from the city manager's office, the project is scheduled to be considered by the Site Plan and Appearance Review Committee on July 9, by the Plan Commission on July 23 and could be introduced for City Council approval on Aug. 11.

Over a year ago the city approved a zoning change that made indoor recreation facilities a permitted special use in industrial zones, like the Oakton Street site.

Randall Mayne, one of the developers of the project, told Evanston Now this morning that he hopes the facility will be used for a wide variety of sports activities, drawing kids and adults from Evanston and surrounding communities. 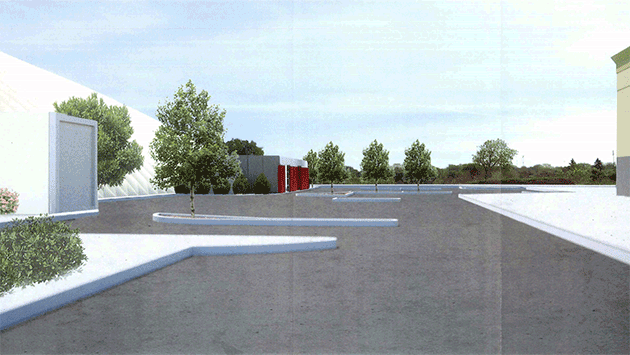 A rendering showing the approach to the dome, heading south off Oakton Street.

Mayne says the proposed dome would be completely air supported, with no metal frame holding it up.

He says the air-supported design has proven to be more durable than fabric-covered metal frame structures.

He says the dome will have sophisticated technology to adjust the inflation level of the dome to match atmospheric conditions as well as a backup generator system to keep it inflated in the event of a power failure.

The city's land use planner, Damir Latinovic, says the development appears to be a good fit for the site — which isn't easily visible from Oakton Street. Most commercial uses would need frontage on the road, he said, but as a destination site, the sports dome should be able to succeed in the relatively out-of-the-way location.

Latinovic said there may be some issues regarding parking for the facility. A site plan shows about 75 parking spaces on the property.

But Mayne says he and his partner are working on solutions to make more parking available for sports dome users when it's needed.

Editor's note: This story was updated with additional information at 4:30 p.m. An earlier version of the story, based on year-old information from city officials, indicated incorrectly that the dome would have a metal frame.