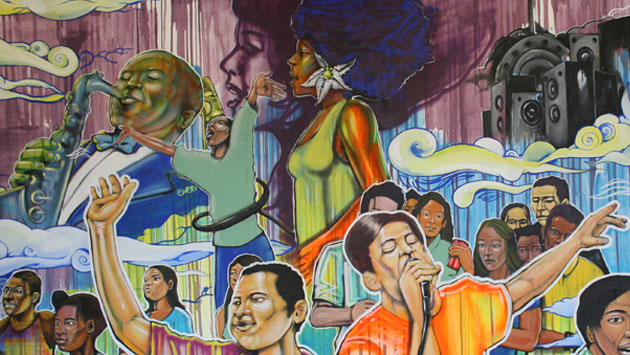 Workers at the Boocoo cultural center on Evanston's west side are organizing an Oct. 2 fundraising event saying that without immediate help the center may have to close its doors.

Boocoo Administrator Alicia Hempfling says some staff members have decided to forego paychecks to try to keep the place running.

"We want Boocoo to be able to continue to offer creative experiences to people in the community, but maintaining the building and regular operating costs are becoming overwhelming," Hempfling said.

But, in a phone interview, Hempfling was unable to provide details of the organization's financial condition.

And the person Hemphling said could do that, Boocoo Director Jason Vanhoose, so far has not responded to a request made through Hemphling to call back.

Boocoo opened in mid-2007 after an extensive renovation project on the former dollar-store building it occupies at 1823 Church St.

It's an operation of the non-profit Enterprise Development Foundation controlled by entrepreneur and former software company executive Daniel Cheifetz.

Cheifetz has not returned a call seeking comment, although Alderman Delores Holmes, 5th Ward, says he told her that he did not write the e-mail newsletter issued by Boocoo late last week that first claimed the center was at risk of closing.

IRS-990 forms filed by the Enterprise Development Foundation show that its expenses exceeded revenues by more than $1 million for the period from January 2007 through March 2009. More recent data is not yet publicly available.

Alderman Holmes said she plans to meet today with city staff members to try to determine whether there are ways the city could help keep the cultural center open.

"I understand everybody's having trouble financially these days," Holmes said, "and I'm trying to do what I can on my end to help."

"Boocoo is very valuable to the area," she added, "and I certainly don't want it to close."

Top: Detail from a mural image featured on the Boocoo website.