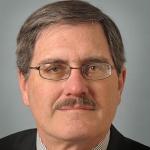 William A. Stafford, a prominent figure in Evanston city and school government for the past 17 years, announced his retirement this week as chief financial officer of Evanston Township High School District 202, effective at the end of the 2015-2016 school year.

"It has been a pleasure to work at ETHS," Stafford told Evanston Now. "Evanston has been a blessing to both of our children," he added, "and I will continue to support the important equity and educational advancements that are occurring" at the school.

A political science graduate of Wittenberg University in Springfield, Ohio, Stafford has a Masters degree from the Ford School of Public Policy at the University of Michigan and a Certificate of Professional Accounting from the Kellogg Graduate School of Management at Northwestern University.

He currently serves on the Board of Trustees of Oakton Community College and served for seven years on the board of the Illinois Municipal Retirement Fund which, with $34 billion in assets, is one of the top 25 largest public pension funds in the country.

He is a member of the Illinois Association of School and Business Officers and, since 2003, has been chairman of the National Economic Development and Capital Improvements Committee for the Government Finance Officers Association.

Board President Pat Savage-Williams noted that Stafford, who serves as board secretary, has been honored frequently by the board as the recipient of a number of state and national awards, and added: "Bill has always served with the utmost honor and integrity and will be missed by us all."

Stafford said that he and his wife, Ingrid, "will continue to live in Evanston and serve the community as best we can."