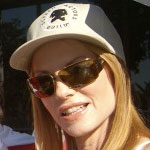 Whodunit? The Alumnae of Northwestern University will be asking Emmy Award-winner and Golden Globe nominee Marg Helgenberger about her crime-fighting role when she is presented with the organization’s 2012 Alumnae Award.

Helgenberger, who recently left her starring role as Catherine Willows in the CBS drama, CSI: Crime Scene Investigation, graduated in 1982 from Northwestern’s School of Speech (now the School of Communication).  She will receive her award at a ceremony to be held at 2 p.m. Sunday, Oct.14, at Evanston’s Hilton Garden Inn.

Helgenberger has appeared in many feature films, telepictures and television series.  Her breakout role as K.C on China Beach won her an Emmy Award in 1990. In 1997, she guest-starred on a four-episode arc on ER, playing George Clooney’s love interest. She costarred with Julia Roberts in the Universal hit drama, Erin Brockovich, as a woman dying of cancer due to a contaminated water source. She also starred as Patsy Ramsey in the highly rated CBS miniseries, Perfect Murder, Perfect Town, based on the best-selling book about the unsolved murder of JonBenet Ramsey.

Growing up in North Bend, Nebraska, Helgenberger acted in school plays but it was not until she attended Northwestern that she thought of acting as a career.  While there, she appeared on stage as Kate in Taming of the Shrew and as Blanche in A Streetcar Named Desire, to name a few.  After graduating college, she was cast on the ABC-TV daytime drama, Ryan’s Hope. While in New York, she also did work with the TADA! Youth Theater Company. She currently lives in Los Angeles.

“Our organization is pleased to have Marg Helgenberger selected for this award, which recognizes a woman who has brought honor to Northwestern University through significant professional contributions in her field and who has attained national recognition,” said The Alumnae of Northwestern University president, Dee Hanlon. The Alumnae Award, established in 1976, has been presented every year to an outstanding alumna — educators, journalists, doctors, artists – each of whom has had a significant impact in her field of endeavor.

The Alumnae of Northwestern University is an all-volunteer organization of women that raises funds for a wide range of projects to benefit the University and shares the University’s academic resources with the community through its Continuing Education program. Founded in 1916, The Alumnae has awarded more than $6 million in gifts and grants, fellowships, scholarships and summer internships, including more than $250,000 given in 2011. For more information, visit the Alumnae website (www.nualumnae.org).