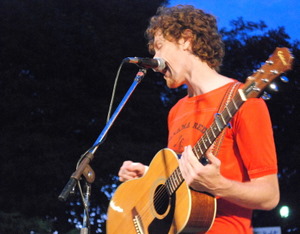 JT Lindsay leaned close to the microphone and looked to the scores of Evanston residents gathered Tuesday night in Dawes Park.

Some spectators arrived with blankets and lawn chairs to listen to the band on the cool night, tossing cards and sipping wine and munching on snacks as the sun set. Others just happened to be biking or jogging through the park before hearing the music and stopping to listen.

JT’s rock band was the last to play in the city’s 16-concert Starlight Concert series. But rock wasn’t the only sound to boom through the three Evanston parks included in the series.

Residents danced to the beats of reggae, punk, jazz and oldies and other genres — sometimes coming from the brass and strings of Evanston’s own. Evanston natives lead two bands that played earlier this month — Erzra Furman and the Harpoons, a rock band, and Entourage, a dance band.

“They really have excellent bands,” said Evanston resident Archana Lal-Tabak, 45, of 2716 Park Place. She recalled a concert in which the featured band, a punk marching band called Mucca Pazza, invigorated the audience so much that some attendants started dancing in the shallow pond of the park.

The city, which has managed the gig ever since it began at least 20 years ago, hires bands primarily from Chicago.

“We try to get a lot of local Chicago bands or local Evanston bands just to kind of support the community,” Series Coordinator Laura Mancini said.

The concerts offer free admission every year and sometimes see as many as 2,000 attendants, she said.

Though sponsors foot some of the bill for the series, the city pays about $30,000 annually for it, Parks Chief Doug Gaynor said. The city pays each band around $800 to $1,400, he said.

JT says his band would sooner give the money back than ask for more.

“We don’t get too many opportunities to play outdoors in a really relaxed setting, you know, by the lake,” JT said. “Aside from the occasional bug flying into your mouth, it’s about as good as it gets.”

The series concludes with a silent film night with accompaniment by pianist David Drazin on August 25 in Dawes Park. 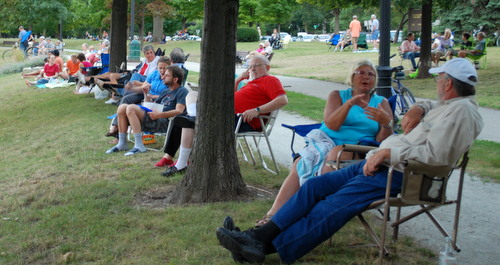 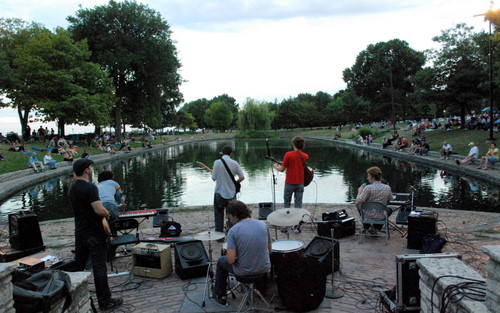 JT and the Clouds performs to spectators at Dawes Park