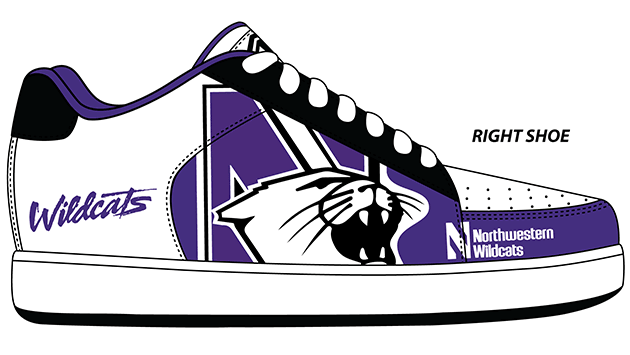 An Evanston-based startup has launched a Kickstarter campaign in hopes of raising funds to launch a planned line of team-themed footwear for sports fans.

Soul to Sole Footwear, based in the Technology Innovation Center at 820 Davis St., hopes to raise $80,000 from the campaign by the Oct. 16 deadline.

Founder Jono Kupferberg says he got the idea for the project six years ago when he wanted to go to a Chicago Cubs game dressed head-to-toe in Cubs gear but found no sneakers with the Cubs design — until he linked up with Isaiah Smith, a Chicago artist who designed him a custom pair.

Kupferberg says he was born and raised in Evanston and that his appreciation for the sneaker sub-culture has a lot to do with his having attended Evanston Township High School.

Now, one caution for Wildcat fans. The design shown above is just a prototype. And Kupferberg plans to start production with footwear for Michigan State fans — something about the size of the fan base — although there is an option for fans of other teams to get a hand-painted custom version designed for their favorite team.