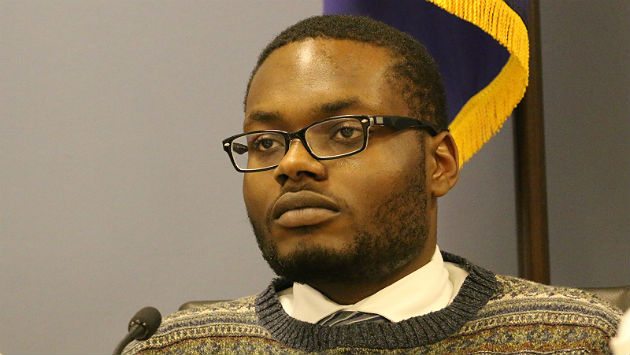 Unless the fine is paid, says a board official, the person whose committee owes the money cannot be certified to run in another race.

Reid has announced he’s running for 8th Ward alderman in next spring’s election.

Tom Newman, director of the State Board of Elections Campaign Disclosure Division, tells Evanston Now that six of the fines, at $5,000 each, were for required quarterly campaign finance reports which were never filed. The rest of the fines were for other un-filed finance reports.

It’s possible that Reid never received the 2019 letter, as well as others about the fines. Newman says as early as March 2018, a letter to the Dev4Ev address at the Regus office rental suite in the Orrington Plaza tower downtown came back “return to sender.”

Newman says typically, 250 to 300 campaign committees statewide miss filing deadlines, but most provide the information quickly. Based on a check of campaign disclosure reports, it appears no other Evanston candidates are currently faced with any failure to file fines.

In the case of campaigns which owe fines, Newman says the candidate often makes a settlement offer to the Board of Elections, which is generally less than the amount owed. Newman says 50% of the fine amount is usually acceptable, although sometimes if the required information is provided the fine might be waived.

He says there has been no communication from Reid’s now-defunct Clerk’s committee.

Evanston Now has tried to reach Reid four times in the past two days. We left two messages at his office, and also sent two e-mails. Those emails described the Board of Elections letter and asked specific questions about Reid’s reaction and what he may do next. So far we have not received a reply.

Reid has faced a number of controversies during his time as city clerk including a dispute over his behavior toward a deputy city clerk and the city’s then corporation counsel, the hiring of a consultant allegedly in violation of the city’s hiring freeze and his access to police body camera footage.

He also was arrested in 2019 on a warrant for failing to appear in court on a traffic violation charge and for driving on a suspended license in 2018.