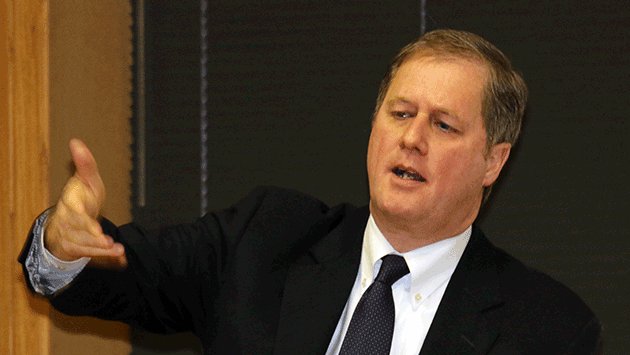 Officials from the state Department of Natural Resources met with about 60 Evanston residents Wednesday night to describe plans for moving the DNRs Coastal Management Program offices to the lakefront Harley Clarke mansion.

While the residents posed a variety of questions, there was none of the outright hostility that greeted an earlier plan to turn the mansion into a privately-owned boutique hotel.

The mansion is currently home to the Evanston Art Center, which has rented it for decades under a $1 a year lease.

City officials have concluded they can't afford to make needed improvements to the building unless it can generate more revenue, and the art center has been considering moving to a new location. 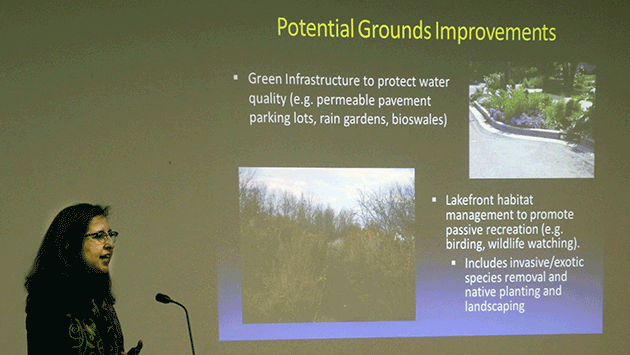 Diane Tecic, who runs the two-year-old Coastal Management Program that could be housed at the mansion, said her unit's job is to encourage conservation and habitat improvement along the lake Michigan shore.

The state "has fabulous coastal resources," Tecic said, and wants to get people more engaged in efforts to achieve long term sustainability.

In Evanston and Chicago the agency hopes to restore areas at the water's edge for wildlife habitat and encourage use of green infrastructure to reduce stormwater runoff as well as improve recreational access to the lake and its shoreline.

She said having the coastal program headquarterd at a promkinent lakefront site would be a great fit, and said the facility could provide an education center opent to the public as well as a coastal science classroom for schools. 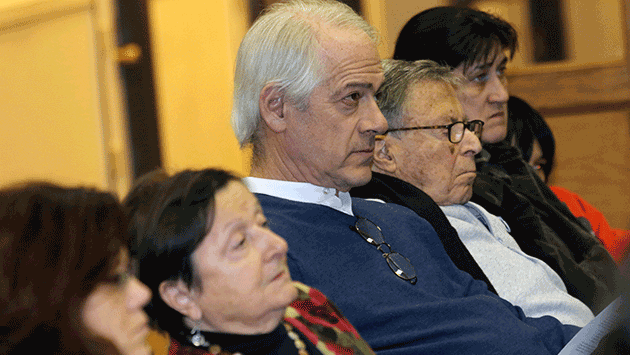 Residents listen to the IDNR presentation in the Parasol Room at the Civic Center.

While no details of the proposal have been worked out yet, Main said the agency has looked at the mechanical issues with the mansion "and we are not scared" about the potential cost of improving it.

He said the agency has federal and state funding for its programs that should be able to cover the cost of repairs and rent to the city.

Tecic said about 10 staffers from her office would likely work at the mansion, and if other IDNR units were included, the total number of employees on site might be as high as 20.

She said that on average two to five people now visit the unit's Chicago office each day.

City Manager Wally Bobkiewicz said that under the plans as discussed so far the city would continue to run the beach and that the city has only been discussing leasing the mansion and its coach house to the state agency.

But obviously if they wanted to help maintain the mansions gardens and habitat, Bobkiewicz said, "I don't think we'd say no."

Bobkiewicz said that after three years of discussion about what to do with the mansion, the city "is coming to a fork in the road."

Even if the IDNR moves into the mansion, he added, the city hopes to work closely with the art center in its efforts to find a new home.

He said he plans to seek guidance about how to proceed from the City Council's Human Services Committee when it holds its next meeting Feb. 3.