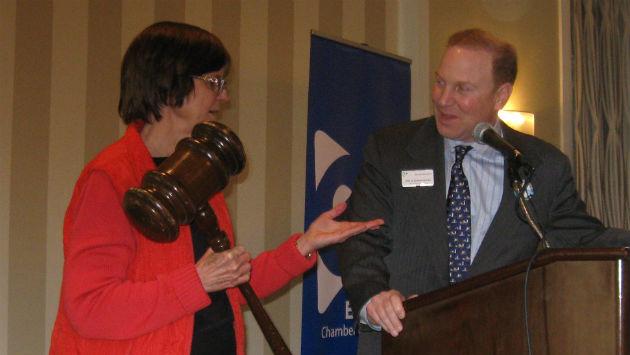 Evanston Mayor Elizabeth Tisdahl began her final “State of the City” address Friday by noting that the nearby suburbs of Morton Grove and Niles have agreed to purchase water from Evanston that will provide an extra $70 million to the city over the next 40 years.

“For nine years I have been talking about selling water to other communities,” she said. “It’s easy to talk about it. It’s not so easy to make it happen.”

She reminded her Evanston Chamber of Commerce audience at a luncheon in the Grand Ballroom of the Hilton Orrington Hotel that Des Plaines bought water from Evanston last year that brought in a half million dollars in revenue and that talks are under way with Skokie and Lincolnwood.

“Just wait a little longer,” she said. “The news is great and going to get even better.” 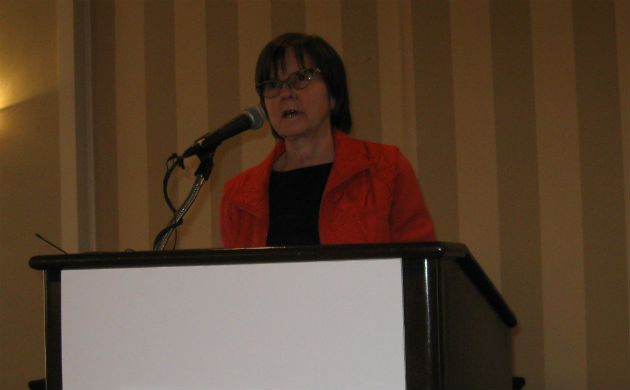 After serving two terms as mayor of the city, Tisdahl is not a candidate for reelection. She will be succeeded either by businessman Steve Hagerty or Sixth Ward Alderman Mark Tendam in the forthcoming school and city election on April 4.

In her address to the chamber Friday, she touched on crime (“Violent crime has decreased by 7.2 percent”) and on immigration (“By a unanimous vote the City Council declared that Evanston is a welcoming city”).

The reason the violence in Chicago is not coming to Evanston, she asserted, was because of the success of the Evanston Police Department in getting guns off the street.

In the last 18 months, she noted, the police department removed 79 guns from the street “without a shot being fired.”  That number included 50 from cars that had been stopped and 19 that were purchased as part of the city’s gun buy back program, she said.

On the immigration front she said that the city convened a task force of representatives from resettlement agencies, both Evanston school districts, Northwestern University, Evanston Public Library and other city departments, as well as local nonprofit organizations to help resettle more than 100 refugee children and their families through the State Department’s Refugee Admissions Program.

She said this task force reached out “to our residents to help welcome the families to our city.” 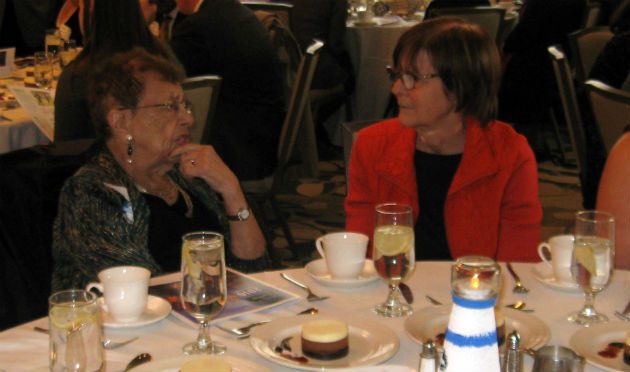 Mayor Tisdahl chats with her predecessor, Lorraine Morton, at the luncheon

The mayor gave a plug for the $14.5 million operational referendum of the Evanston/Skokie School District 65 that will be on the April 4 ballot, noting that a decision by the voters to raise taxes is a difficult one “because we all want to preserve diversity in Evanston.”

If taxes are increased, she said, “some people will no longer be able to afford to live here. But if we do not increase taxes, we will shortchange our children.”

If people have jobs that pay a living wage, she said, then they can pay their share of property taxes.

“The goal is not mediocre schools and continued poverty,” she declared. “The goal is a new form of gentrification where jobs move people from poverty into the middle class. I believe we are beginning to make that happen.”

On the jobs front, the mayor made special note of the partnership between the city and Northwestern University that created the Skilled Trades Program, now in its third year, that employs six men and women each year in a skilled trades apprenticeship program.

“Over 12 months,” she said, “participants receive paid on-the-job training in a variety of skilled trades through the Northwestern University Facilities Management Department.  To date, the program has a 100 percent employment rate, most being hired at Northwestern.”

On the economic front, the mayor said that 86 businesses opened in Evanston in 2016, but only 24 closed. “The commercial and industrial vacancy rate at the end of 2016,” she said, “was the lowest in 10 years at 5 percent, despite the addition of new commercial space at Chicago Avenue and Main Street.”

And unemployment in Evanston, she noted, “hovered around five percent or less and remained lower in Evanston than in Chicago or the state of Illinois.”

The mayor did not hold out much hope from the promised federal infrastructure bill, which she said is relying on private money, rather than federal money.

“Selling parking did not work well for Chicago,” she noted.

”There may be no grants, just a fire sale of city assets,” she said. “If that’s what’s happening, we will not participate…at least I hope we will not. Short term political gain comes at horrific long term costs.”

The mayor said that Evanston still has too much debt, although it has declined somewhat from the $508 million at the start of her administration in 2008 to an estimated $415 million today.

“The challenge is to continue to decrease our debt levels. The temptation is to increase them,” she declared.

On the environmental front, the mayor said her recent visit to Beijing for an exchange of ideas with other mayors on climate change was paid for by the Bloomberg Foundation because the new federal administration “would not appropriate any money for anything to do with climate change.”

Because Evanston cannot look to Washington or Springfield for help, she said, “we need to solve our own problems, and we need to solve them before we are all walking around like the people in Beijing with masks over our faces to help us breathe and a sky we cannot see.”

She noted that five years ago, the City Council approved a contract for 100 percent green power for Evanston residents and small businesses that will expire this August.

“I believe the new council should renew Evanston’s commitment to sustainability,” she said, “by again contracting for 100 percent green power.”

She added: “Travel bans, deportations, unravelling the Clean Air Act are more than criticism. They are threats to our community.

“It is time to band together, to be good to one another, to help one another more.”