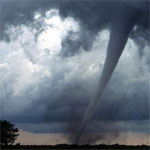 Harrisburg was hit especially hard by a Feb. 29 line of storms that produced a 170-mph tornado. Alvey's house had only light damage, but Alvey's cousin and her uncle lost their houses to the tornado.

"Everything they ever owned is now gone," she said, referring to family and community members. "We went through the debris the other day, just pulling out anything we could find. Even if something was broken, both wanted it for the memories."

The Federal Emergency Management Agency, or FEMA, denied residents of Gallatin, Randolph, Saline, Union and Williams counties federal assistance over the weekend, but Gov. Pat Quinn announced he would appeal the denial.

"FEMA underestimated the impact this deadly tornado had on small towns &hellip; we have already begun work on our appeal of this decision in order to secure federal assistance," Quinn said in a statement Monday.

Illinois' initial application for assistance estimated $3.3 million in disaster relief, based on the costs of temporary housing, building repairs, home reconstruction and other needs. That amount could change as more inspections are carried out. This relief allows people to apply directly to FEMA for monetary disaster aid.

Quinn's office is drafting the appeal letter. The state has 30 days to gather any new information or reassess damage before submitting an appeal with updated assessments.

"FEMA's job is supposed to protect and serve, and we are waiting to see them help us," he said.

Greg said that if the appeal falls through, storm victims will continue relying heavily on donations from the Red Cross and other organizations. He also said Harrisburg is a "tight-knit community where residents will help one another," by providing housing or other needs.

Harrisburg was the hardest hit community in Saline County. As a whole, 330 houses were damaged, and nearly 100 houses were destroyed.

FEMA officials denied the state's original application for disaster relief: "(T)he damage was not of such severity and magnitude as to be beyond the capabilities of the State, affected local governments, and voluntary agencies."

However, FEMA declared communities in Indiana and Kentucky disaster areas after the same line of storms that hit Illinois destroyed communities in those states. Kentucky and Indiana suffered a greater loss of life, 13 deaths and 23 deaths respectively; Illinois saw six people die.

Patti Thompson, spokeswoman for the Illinois Emergency Management Agency, said state and local governments do not have the money to assist uninsured homeowners and repair damaged infrastructure and other storm damage.

"What FEMA described in the letter is just not the case in Illinois," Thompson said. "You have so many people whose homes are totally gone, or substantially damaged."

This isn't the first time Illinois officials will file an appeal against FEMA. The last appeal Illinois was in spring of 2008, when towns in east central Illinois experienced flash floods, leaving rural communities like Watseka, underwater for days. The initial request for aid was denied, but after floodwaters receded, FEMA officials re-examined the damage and relief was granted.

If the state wins the appeal, homeowners will have the option to fill out loan and grant forms. From there, FEMA officials will determine grant amounts based on the homeowners' needs, such as how much damage was done, and how much their insurance will cover.

Even if FEMA doesn't declare the counties a disaster area, storm victims will get the opportunity to apply for low-interest loans through the Small Business Association, or SBA, to help rebuild their homes.

Gregg estimates the cost of damage in Harrisburg to be in the tens of millions of dollars.

Illinois' initial requests for aid estimated residents would need $5 million in low-interest loans from the SBA, in addition to the $3.3 million in grants from FEMA.