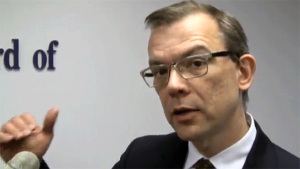 SPRINGFIELD  —  The state of Illinois is telling millions of parents that their kids did not get dumber since last year, the state’s elementary school test just got harder.

SPRINGFIELD  —  The state of Illinois is telling millions of parents that their kids did not get dumber since last year, the state’s elementary school test just got harder.

The Illinois State Board of Education has “raised the bar” for the Illinois Student Achievement Exam, which kids in third through eighth grade will take this spring.

“What’s changed is that the bar is higher. And it’s more aligned to the Common Core,” said Illinois State Superintendent Chris Koch.

In a letter to parents Koch and the state board said the double-digit drop in scores “does not mean that our students know less. Instead, ISBE is simply expecting more from students.”

The changes to the ISAT scores are just the first of many changes for students, parents, local schools and the state of Illinois.

Within two years Illinois will do away the ISAT all together, replace it with a new yet-to-be-written test, and fully implement the national Common Core State Standard Initiative.

Illinois is one of 45 states to sign-on to Common Core, which are essentially national learning standards. Supporters say all students should have the same learning goals, while critics worry that a one-size fits-all approach may not be the best way to teach students across the country.

“We are preparing students, teachers, and (school districts) for that test,” Koch said.

But some local school districts don’t feel prepared at all.

“The educational bureaucracy is out of control,” said Carbondale High School Superintendent Steve Murphy. “The state is changing the test scores for a test that is going away in a few years.”

But Murphy’s students, as high schoolers, will not take the test.

Carbondale’s other superintendent, Mike Shimshak, who oversees the elementary schools, will see his students’ scores drop. Though Shimshak is not focusing too much on the scores.

“We look to see how we compare to the state. If they move up or down, we will likely follow,” Shimshak said. “We want to know how we are doing compared to other districts like us.”

Koch said the state is going to shift focus from individual tests scores as well, as part of the Common Core, and move toward “growth standards.”

And that worries Murphy.

Murphy said he worries about the coming changes linked to Common Core.

“We have over 800 school districts in Illinois, and the state and federal governments are trying to treat them all the same.”