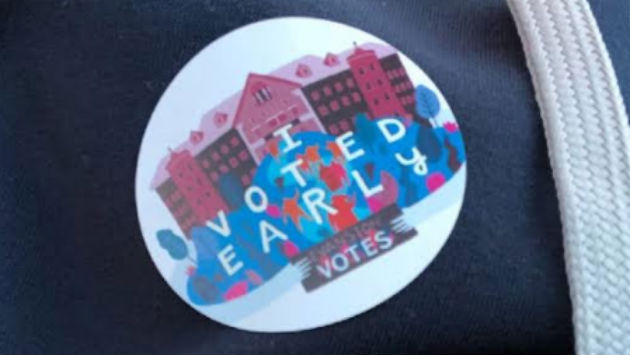 A sharply-worded letter from the county clerk’s office notes that statutes bar anyone from distributing any materials within a 100-foot “campaign-free zone” around voting sites and directs Reid to “cease and desist” from such activity.

The letter, signed by Daniel P. Madden, the legal advisor to County Clerk David Orr, goes on to say that the city clerk’s status as a local election official “is in no way related to the conduct of early voting.”

The local election official’s responsibility, it adds, “is limited to registering voters, receiving petitions and certifying the ballot. It is not a position that has any election management responsibility.”

An image of the sticker provided by Reid.

Reid did not immediately respond to an email message sent late Wednesday afternoon seeking comment on the incident.

Meanwhile, the Chicago Tribune reports that Reid appeared Tuesday in Skokie district court where the case in which he was charged last month with driving on a suspended license was continued until April 6.

Reid told the paper that he now plans to get his driver’s license back in good standing. It has been suspended since 2013. He’ll have to pay reinstatement fees and provide proof of insurance for any car he owned to do that.