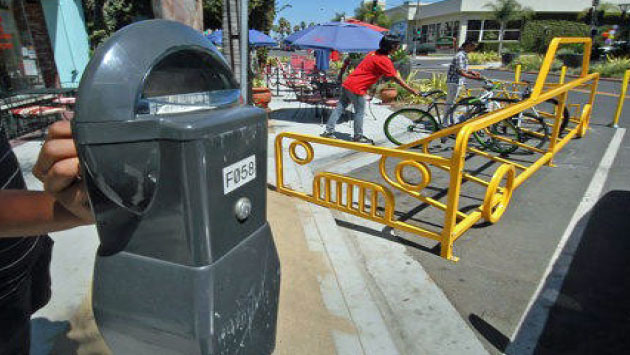 Evanston aldermen Monday failed to agree on plans for a pilot project  to create a bike corral downtown.

An image of a bike corral in Long Beach, Calif., included in a report from Evanston's Environment Board.

Evanston aldermen Monday failed to agree on plans for a pilot project  to create a bike corral downtown.

City staff proposed, as a discussion item at the Administration and Public Works Committee, setting up a corral on Benson Avenue just outside the entrance to the Evanston Athletic Club at 1723 Benson Ave.

The corral would occupy the curbside space now taken up by two parked cars and would provide storage for 12 to 14 bikes.

Public Works Director Suzette Robinson said that the two spaces now generate about $6,000 in parking meter revenue, but she predicted that revenue would still be earned by the city, with drivers just shifting to other on-street spaces or the downtown garages.

Alderman Coleen Burrus, 9th Ward, suggested the Athletic Club should be asked to pick up the cost of the lost meter revenue, since many of the bike riders in the area are patrons of the club.

As an alternative, she suggested putting the corral instead in what she said was a no parking area further down the block by the Second Baptist Church at 1717 Benson Ave.

But Robinson said that space was needed for clearance for trucks emerging from the alley and Alderman Delores Holmes, 5th Ward, said it would interfere with funeral hearses and other special parking needs for the church.

Holmes said bike riders are ignoring signs on parking meters urging them to park bikes in racks at the opposite end of the block and suggested police should ticket people who chain bikes to the meters.

Robinson said enforcement of such a rule would be very difficult. "The only way we can do that is to cut the lock and take the bike," something that. she said, would prove highly unpopular.

She favored the test and said, "if the project doesn't work, we can always restore the parking spaces."

Rickey Voss, who heads the city's parking division, said a new parking meter system, which could eliminate the individual meter posts cyclists now chain their bikes to, is likely to be in place sometime later this year.

Alderman Ann Rainey, 8th Ward, suggested the city staff should take another look at the block and come back with a revised plan.

The bike corral concept has been under discussion at least since last summer, and has won support from the city's Environment Board.