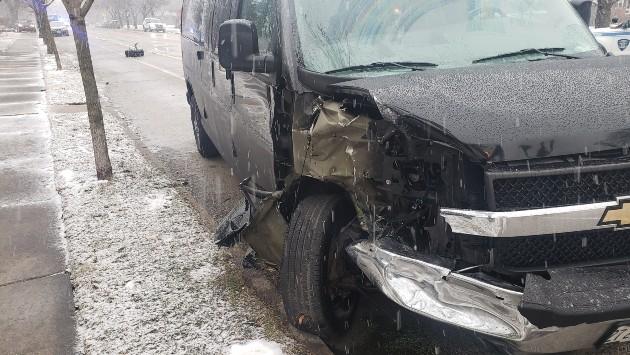 Update 5:40 p.m.: Evanston police say a van that had been stolen minutes earlier on Sherman Avenue crashed into a car on Asbury Avenue near South Boulevard about 3:30 this afternoon.

Police Cmdr. Ryan Glew says the van was taken from the 1400 block of Sherman Avenue and that a firefighter who was on a call in the area saw the van speed by southbound on Sherman.

Not long after that, Glew says, Evanston police saw the van on Howard Street near Custer Avenue and tried to stop it, but the van didn’t stop.

Glew says the van was then spotted by Chicago police somewhere south of Howard, but they were unable to stop it either.

The van driver then doubled back into Evanston on Asbury Avenue before collding with the car in the 600 block of Asbury.

Glew says one person was trapped in the car after the wreck and firefighters had to work to extricate the person from the vehicle. The victim was transported to St. Francis Hospital with minor injuries.

Glew says the van driver fled from the accident scene but was captured by police nearby. He was transported to Evanston Hospital for treatment of minor injuries.

Glew says charges are still pending against the van driver and his identity has not yet been released.

Asbury was closed to traffic for about 90 minutes while police investigated the crash.