“I started Thriftgeek because I couldn’t find a job I wanted,” says Susan Ganem, co-owner of the secondhand store that opened recently at 522 Davis St. 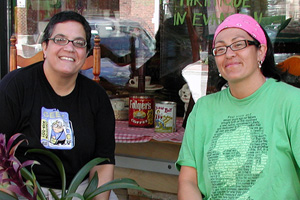 That and the fact that both Ganem and co-owner B.J. Negrete had a lot of stuff. “My home was full,” says Ganem. “B.J. was renting a storage facility to hold her stuff.”

The co-owners have been poker-playing friends for a long time. They also share a passion for finding what they call treasures. “We share the same aesthetic. We love the thrill of the treasure hunt, of finding original Fiesta Ware in good conditional at a reasonable price.”

After spending 15 years collecting, they don’t mind selling their stuff. “Now I’m surrounded by it,” Ganem says.” My personal life is simpler because it is purged from my home.” Negrete agrees, “I like finding really cool and unique things and having somebody else enjoy them too.” 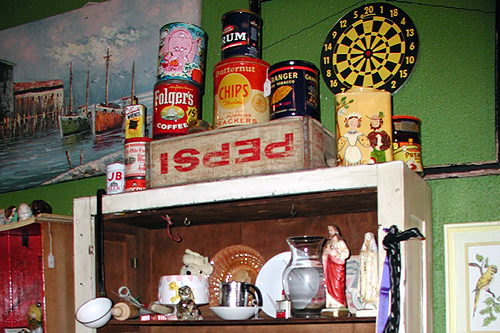 For Ganem, opening a shop was natural. “I grew up in a liquor store in Connecticut,” she says. “Retail is in my blood.”

Most days, some of Thriftgeek’s treasures are placed out on the sidewalk to lure passersby. One day last week: A canister/cookie jar shaped like a mushroom, a vintage Formica table ($25), blue and red Pyrex mixing bowls ($5 each), two manual typewriters. Each day is different. 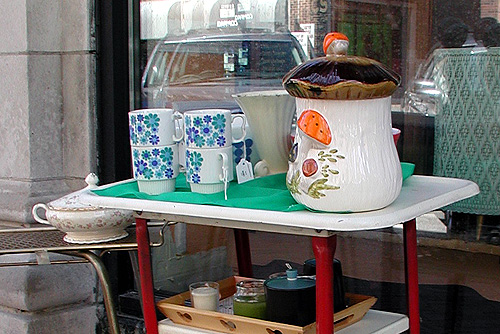 Walking into the shop is a bit overwhelming. There’s a lot of stuff. But it’s soon apparent that the contents are grouped together and thoughtfully displayed – albums, games (Clue, Yahtzee, Probe, Life), old picture frames, lots of glassware. Most items are from mid-last century. There’s furniture (enamel table, 1970s grandfather clock, Swedish modern end table), clothes (jeans at $10 and up), purses, books. 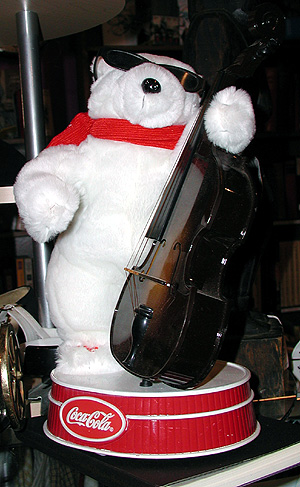 Ganem’s and Negrete’s experience is as eclectic as their shop. After college, Ganem had a career in sports information and later went to work for a small wine business, followed by five years at a dog kennel and daycare in Chicago. She enjoys being in business for herself. “I was not happy working for someone who could let me go because his son needed a job, “she says. “Now at least I’m putting out my own fires.”

Negrete is a cement mason by trade. “I’ve been with my local for 16 years. I love pouring concrete.” She took a couple of years off to work on her art – she’s a painter – and then decided to open the shop. “I thought I’d try something different. I might go back to concrete next year.”

The two have divided the labor. “I’m the person in the background,” says Negrete. “I choose most of the clothes, the artwork, most of the furniture.” She has also refinished some pieces that are for sale and organizes the displays. “I like to make the shop look like I want it to look.”

Ganem spends time with customers, sets prices, and is the expert on glassware, albums, books, games.
“We both have the gift of the eye,” Susan says. “I’m going to be able to tell the Vera scarf from the mountain of scarves.” And sell it in the shop for $7.

But it’s not a thrift store, according to Ganem. “In a way, Thriftgeek is filling in the cracks for treasure hunters. Somebody might have a salt and pepper collection. They’ll come in here and find that one that they’ve been missing or the never saw before. So we can fill in the cracks of other people’s collections.”

“We keep acquiring things,” Ganem says. “For instance, a couple was downsizing after 50 years. First the children take what they want. We come in before the Salvation Army.”

They get things from garage sales, estate sales, flea markets, rummage sales, thrift stores. Ganem visited five thrift shops on her day off. People will bring a box of stuff to them. “Some things are too good to throw away, but they don’t have the energy to have their own garage sale.”

“Somebody came to the back one day and said, ‘My car’s been full of things I’ve been meaning to drop off at the Brown Elephant. Will you take them?’” Ganem adds, “Of course, we’ll take them.”

Everything that has a price tag is researched by Ganem. “I’ll see those mugs on eBay or Etsy and if they cost $4 each on eBay but you have to pay freight, I’m going to charge $5.” She points to another item. “That Picasso cream and sugar set was just given to us in a box of stuff. A woman has a booth in an antique mall and those are too new for her. She can’t sell them, so she gives them to us.”

“These are pieces that have stood the test of time. Those Pyrex mixing bowls – I have stainless steel mixing bowls, but I also have the Pyrex ones. That’s what I grew up with and that’s what I’m comfortable with.” 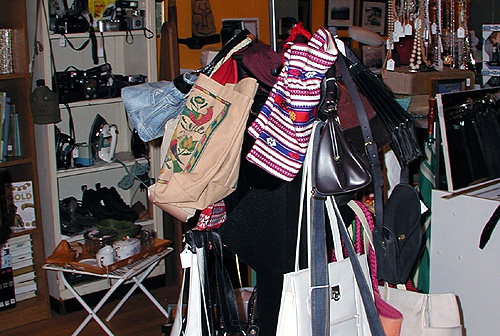 They give things away too. “Things that don’t work for us we take to the thrift shop or to the Junior League or to the Salvation Army or they get left in a box by the Dumpster. We want to give back to the community.” Ganem says.

Ganem and Negrete spent some time looking for retail space in Chicago before settling on Evanston. “I immediately fell in love with the space,” Ganem says. ”The high ceilings. The relative bigness of the space, compared to what we were seeing in Chicago. This was by far more reasonable per square foot than we were able to get in Chicago. It probably took only six weeks to decide on the space and to open. That meant painting and all the city permits. I think it would have taken at least twice as long in Chicago to get open.” 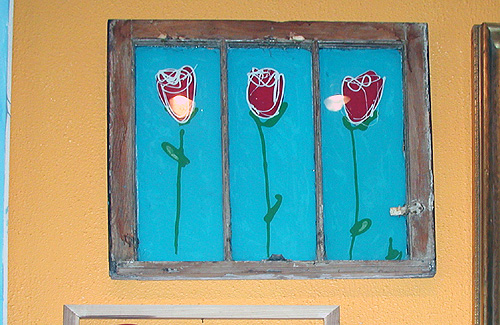 A window, hand-painted by Negrete.

Thriftgeek’s customers are an eclectic bunch, too. “Four kids from Northwestern show up regularly,” says Negrete. “They try on hats and jackets, buy a few t-shirts.” Then there are two women who come in every week and have a competition to see who can find what’s new.

“Our customers have to be willing to come into a second hand store,” Ganem says.” I know a lot of people who wouldn’t even think of it, even some of my sisters. But I think that with the recession, people have to rethink their shopping habits. So we have the people who have never been into stores like this who are just discovering them and seeing how wonderful they are.”