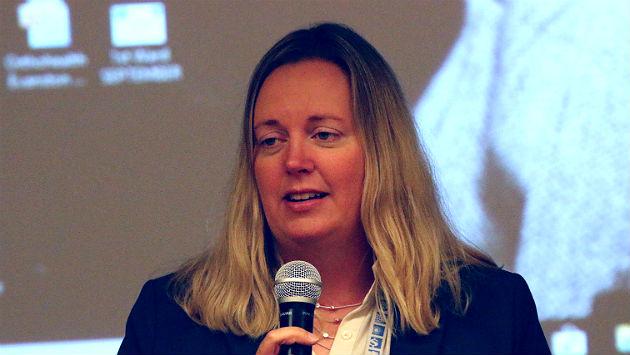 Assistant City Manager Erika Storlie is expected to be named interim city manager by the Evanston City Council at next Monday’s meeting.

The anticipated selection of Storlie was discussed by City Manager Wally Bobkiewicz at Tuesday’s 1st Ward meeting where Alderman Judy Fiske indicated she expects to vote for her. “She takes my phone calls,” Fiske said.

Bobkiewicz, who’s been city manager since 2009, last month was named city administrator of Issaquah, Washington, and is scheduled to begin work there later this month.

Bobkiewicz said Storlie began her career in Evanston city government in 2004, left for a few years to work for Sony Electronics in San Diego, and then returned to Evanston initially focused largely on developing the city’s website.

She was named deputy city manager in 2013 and in 2015 was named director of the city’s Administrative Services Department. She added the role of assistant city manager, the number two official in city government, last year.

She has a bachelor’s degree in organizational behavior from Northwestern University and a master’s in public administration from Kent State University.

Storlie, her wife Kristi, and their four children live in Evanston.

Once the interim city manager is selected, the Council is expected to set in motion a search process for a permanent replacement for Bobkiewicz.