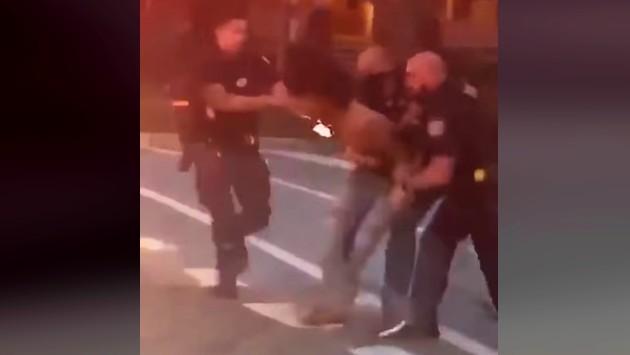 A video posted to Facebook by the person arrested, 20-year-old Trenton Alexander Hunt of 1906 Asbury Ave., shows him walking toward a car that police had stopped on the westbound lane of Church Street. A person who apparently had been in the car was sitting on the curb behind it.

In the video, Hunt repeatedly approaches the car after being told by police to not interfere with the traffic stop.

Eventually, as officers approach to arrest him, he tries to run away and is tackled by the officers in the intersection of Asbury Avenue and Church Street, as shown in another video posted to Facebook by a bystander. He was arrested and charged with disorderly conduct.

In a statement Storlie said, “People are rightfully concerned about what happened and whether or not it was appropriate.”

“We take all use-of-force incidents seriously,” Storlie said. “All such incidents are reviewed thoroughly” by the Police Department’s Office of Professional Standards to determine if policies and procedures were followed and conduct was appropriate.

She said Police Chief Demitrous Cook has expedited the review of this incident. “If conduct was not appropriate, please be assured that actions will be taken and individuals will be held accountable,” Storlie added.

“This incident happened during a time when we are all hurt and angered by the death of George Floyd in Minneapolis,” Storie said. “While one incident cannot be compared to the other, we cannot acknowledge one without acknowledging the other.”

“What happened in Minneapolis is reprehensible, and we must do everything we can to ensure that history does not repeat itself,” the interim city manager said. “We may feel powerless and hopeless, but we each have a personal and collective responsibility to take action to change hearts, minds and behaviors.”