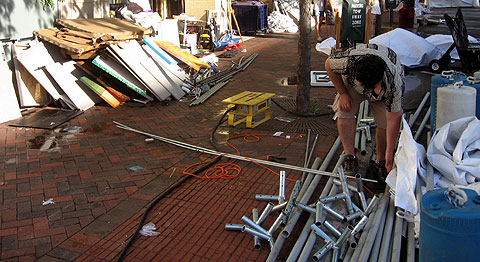 Damaged artwork is piled against a wall as an exhibitor tries to clean up after the storm.

Evanston Fire Chief Alan Berkowsky said at the scene that four to six people with what appeared to be minor injuries had been transported by ambulance to local hospitals.

The storm rolled in from the west, and Berkowsky said most of the storm’s damage seemed focused on the intersection of Church Street and Sherman Avenue.

Fair-goers walk past a pile of demolished tent frames at Church and Sherman.

Many exhibitor tents on Church Street were blown over by the storm and some were destroyed.

The storm hit artists exhibiting pottery especially hard, and once the storm had subsided many of them were left to pickup shattered pieces of their wares from the street.

There was substantially less damage to displays on Sherman Avenue to either side of Church Street. 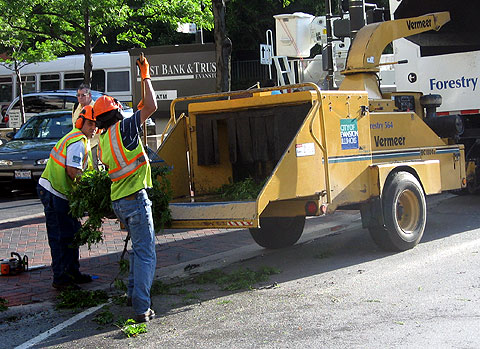 The festival is scheduled to continue on Sunday from 10 a.m. until 6 p.m.