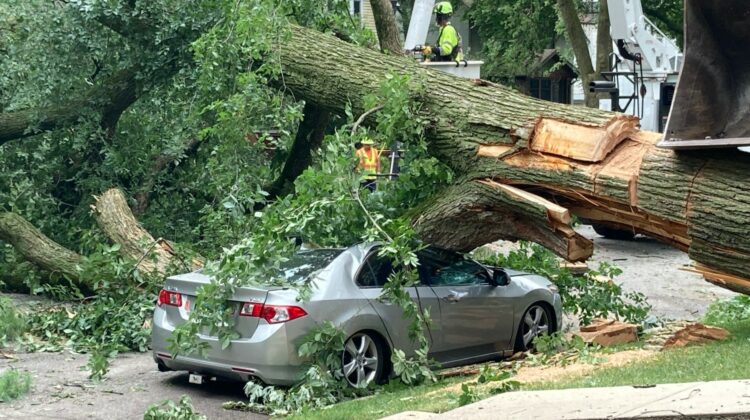 A massive tree was uprooted by the storm, crushing a car parked at the curb. (Jeff Hirsh photo)

The powerful thunderstorm that ripped through Evanston Tuesday evening tossed garbage cans around like frisbees, pushed over a street light pole downtown, and damaged more than 200 places as trees and tree branches snapped and fell in the high winds.

Power lines came down along with the branches, leaving, as of 9 a.m., about 3,200 Evanston ComEd customers still without electricity.

Perhaps the largest tree to come down, a huge elm, ripped up the sidewalk in front of 2300 Sherman Ave., crushed a car, and came to rest blocking the entire street. Fortunately, no houses were hit, and no one was hurt.

Margaret Marino lives across the street.

“It was crazy,” Marino said. “It was so loud. We were outside on the porch watching the storm” when the tree was uprooted and crashed to the ground, missing Marino’s house by maybe 100 feet.

“It was the biggest tree on the block,” she added.

Former 1st Ward Alderman Judy Fiske lives a few houses down. Fiske said when she walked outside and saw concrete sidewalk blocks pointing upward, “I thought, is that plywood? My God, no,” she realized. “It’s a tree!”

Fiske says the tree likely dates to the turn of the 19th into the 20th centuries.

She is one of the many still without power. ComEd says about 80% of those customers should have their electricity restored by 11 p.m., but the rest may not be back until Friday afternoon.

City spokesperson Patrick Deignan says reports of tree damage have come in from more than 200 locations. Anyone wishing to report such damage can call the Evanston information line at 847-448-4311.