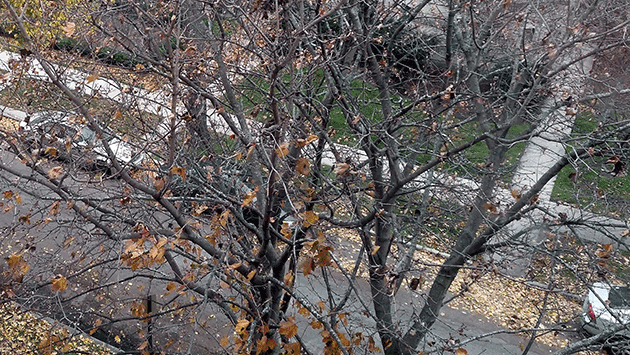 City crews are back at work trying to finish clearing leaves from Evanston streets, after being diverted to deal with a couple of light snowfalls in recent days.

Assistant Public Works Director James Maiworm told aldermen earlier this week that the street sweeping work would continue until through the first week of December.

When it gets really cold, especially after there's been some snow, Maiworm says, the moisture can end up freezing the leaves to the pavement, making the removal efforts more difficult. He said he's hoping for warmer weather over the next few days to help with that problem.

Not everybody in town is happy with the progress of leaf clearing so far. Evanston Now reader Jerry Saperstein sent in the photo above of the 2000 block of Harrison Street.

He said it seems like the city no longer makes any attempt to get people to move their cars — and leaves end up left on the pavement until spring.

If you're raking leaves, city officials say it's illegal to push them onto the sidewalk or into the street.

Leaves can block the flow of storm water along the curb, and can form a mat over drainage structures, preventing storm water from entering the sewer system and causing flooding.

Violations can be reported by calling/texting 847-448-4311. Special pick-up fees will be assessed by the City’s Public Works Department.

And, if you're doing the right thing and putting your leaves into your yard waste container, the last yard waste pickups of the year will happen on Dec. 1 through 4.