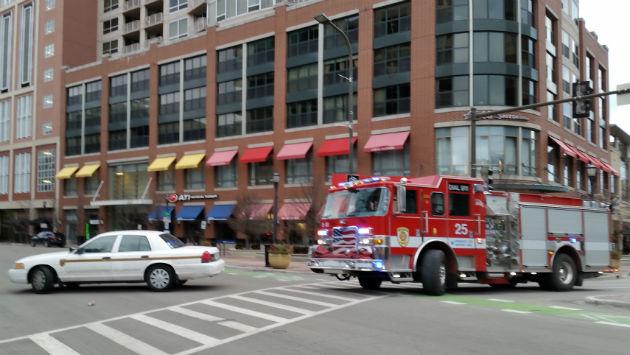 Streets around the Sherman Plaza complex downtown were blocked off this afternoon after officials noticed debris falling from the roof of the high-rise building.

Officials on the scene said some construction debris had fallen from the residential tower onto the roof of the parking garage and there was worry that it might also fall into the alley that separates the high-rise from the First Bank & Trust building.

Initially only auto traffic was blocked, but later officials barred pedestrians from the sidewalks around the building.

CTA commuters had difficulty getting to the Davis Street station because of the blocked streets. Police asked the CTA to close the east side exit doors from the station.

Elsewhere in Evanston there are numerous reports of downed trees and power failures.

Those include 565 ComEd customers without power near Lovelace Park in far northwest Evanston and about 1,000 without power along Chicago Avenue south of Main Street.

Update 8 p.m.: City crews worked into the evening to clear trees knocked down by the high winds at about 20 sites around Evanston.

The area around Sherman Plaza was reopened to pedestrian and auto traffic about 6:30 p.m., but access to the top level of the parking garage there remains blocked.

ComEd reports restoring power at this hour to more than half the customers that lost it earlier in the day, but the widespread outage near Lovelace Park continued, as did smaller outages at scattered sites elsewhere in the city.