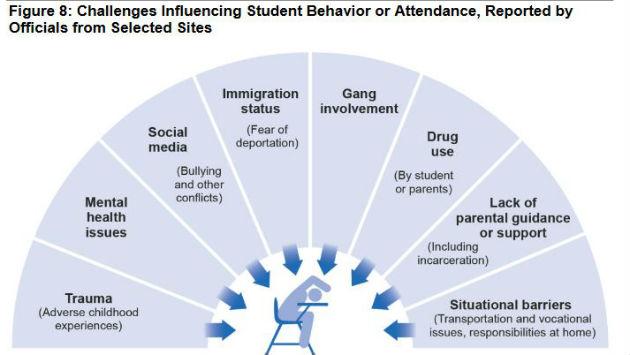 Research studies suggest that challenges students face outside the classroom and unacknowledged biases among teachers both are factors in higher discipline rates for students who are black, male or have disabilities.

A newly released report from the Government Accountablity Office says research studies “suggest that implicit bias – stereotypes or unconscious associations about people – on the part of teachers and staff may cause them to judge students’ behaviors differently based on the students’ race and sex.”

The GAO report also notes that health and social challenges outside the classroom, including poverty and childhood trauma, can lead to educational challenges, such as lower grades and more suspensions and expulsions.

A GAO analysis also showed that increases in the percentage of low-income students in a school were generally associated with significantly higher rates of disciplinary action.

And it’s not a new problem. A 2002 analysis by researchers at Indiana University of studies conducted over the previous quarter century found that “black students are suspended disproportionately due primarily to a higher rate of office referral” and are more likely to be referred to the office for more subjective reasons.

And after conducting their own study, the Indiana researchers concluded, “Neither this nor any previously published research studying differential discipline and rates of behavior by race has found any evidence that the higher rates of discipline received by African-American students are due to more serious or more disruptive behavior.”

As part of its analysis, GAO interviewed school officials in five school districts in California, Georgia, Massachusetts, North Dakota and Texas about their challenges with student behavior and how they are approaching school discipline.

School officials noted a range of issues, such as the “effects of poverty, mental health issues and family dysfunction” that contributed to behavior that leads to discipline. For example, the need to care for younger siblings may cause students to be late to or skip class, with chronic absenteeism resulting in disciplinary actions.

Social media has an effect as well. “Social media arguments can cause students who were not part of the original situation to be pulled in, creating classroom disruptions that end in discipline for a larger group.” In addition, disagreements on social media last for longer periods of time.

Keith Robinson, ETHS associate principal for educational services, agrees. “Social media is a contributor to the  verbal confrontations that we deal with.”

“We teach students etiquette on how to deal with conflict,” he says, but “social media really does impact some of the decisions that our students are making.”

Officials in all five schools interviewed by GAO said they are using alternative discipline models, such as positive behavioral interventions and supports (PBIS), restorative justice practices, and social emotional learning (SEL) in an effort to prevent challenging student behavior and to support individuals and the school community.

After a state law was passed in 2015 designed to curtail the “school to prison pipeline” by limiting the use of suspension and expulsion in Illinois schools, policies at both Evanston school districts were changed and suspensions have declined.

Administrators from Evanston/Skokie District 65 and ETHS say they use a variety of techniques to reduce the number of days children are out of of school for disciplinary reasons and to help students deal with conflicts more positively.

For example, District 65 has added break rooms in some schools to provide a space for kids to cool off, as well as social workers to help students solve interpersonal problems.

ETHS has expanded the use of “alternative to suspension” programs, including peer jury, restorative justice, a substance abuse education program and support groups for male and female students.

Some approaches are proactive. Dan Coyne is one of six social workers in District 65 to teach a Social, Emotional and Equitable Learning (SEEL) curriculum to kids in kindergarten, first and fourth grade. The classes involve such things as empathy, how to reduce bullying and how to be safe. Students in grades 2, 3 and 5 get classes in computer coding.

The goal, he says, is to “help kids learn some job skills for a 21st century world and also learn how to be nice human beings.”