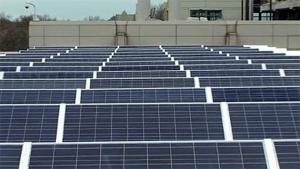 The Ford Motor Company Engineering Design Center, the first LEED-certified building at Northwestern University, has been waiting for a green crown. Now, thanks to some industrious students, it has one.

The Ford Motor Company Engineering Design Center, the first LEED-certified building at Northwestern University, has been waiting for a green crown. Now, thanks to some industrious students, it has one.

The Centennial Solar Panel System, a solar photovoltaic array covering nearly the entire available roof of Ford, was installed and connected to the building’s electric grid.

Students from Engineers for a Sustainable World (ESW) and the Northwestern Sustainability Fund (NSF) have been working for two years to make this “solar system” a reality.

“One of our objectives is to expose students and others to sustainable technology, which many of us think will be a big piece of engineering for the next generation,” said Joshua Kaplan, ESW’s project manager for the solar panel display and a chemical engineering junior in the McCormick School.

It is Northwestern’s first onsite renewable energy source and a new educational tool for the University and the community. The name honors the centennial of the McCormick School of Engineering and Applied Science, which celebrated 100 years of engineering in 2009.

The two groups raised more than $117,000 from on- and off-campus sponsors and worked with many University groups, including ISEN (Initiative for Sustainability and Energy at Northwestern) and Facilities Management, to bring the project to fruition. The biggest donation was a grant of more than $65,000 from the Illinois Clean Energy Community Foundation.

The 16.8-kilowatt panel display is expected to generate about 20,000 kilowatt-hours (kWh) of electricity per year, enough to power a computer lab in Ford. It reduces the University’s reliance on the power grid.

The clean energy source also will provide classes with data for statistics projects. A Web-based monitoring system, with a display in the lobby of the Ford building, will tell students and the general public how much electricity the solar panel is producing, the amount of sunlight the campus is receiving and how much carbon dioxide the array is offsetting.

And it makes a green building even more sustainable, one of the students’ goals. (Ford was the first Northwestern building to achieve silver-level certification from the Leadership in Energy and Environmental Design, LEED, Green Building Rating System.)

“I learned so much from this experience, from grant writing to project management,” Kaplan said, “but one of the most important things is this. If you want to see something change at the University, if you do your homework and come up with a reasonable plan, it can happen.”

“Reaching our fundraising goal was a great experience, and we discovered how much people at Northwestern care about the environment and about the students actually taking part,” added Anthony Valente, the project manager for NSF and an economics senior at the Weinberg College of Arts and Sciences.

The solar panel display atop Ford is photovoltaic, meaning it produces electricity. Sunlight hits the panels, which excites electrons, generating an electric current. This direct current (all solar panels are DC) is converted to alternating current, which is what the Ford building uses. The current goes to the building’s mechanical room and into the electric circuits, where it is put to work.

In February the Environmental Protection Agency announced that Northwestern was number five on the federal agency’s most recent list of the largest green power purchasers among colleges and universities. And, more recently, the EPA announced the Big Ten, with Northwestern as a member, as the conference winner of its “College & University ?Challenge” with the largest total purchase among all conferences for the 2010-11 academic year.

The University supports green power by matching 74 million kilowatt-hours of its annual energy use with Green-e Certified Renewable Energy Certificates. This green power commitment represents 30 percent of the University’s total annual electricity use and places Northwestern in the EPA’s Green Power Leadership Club.