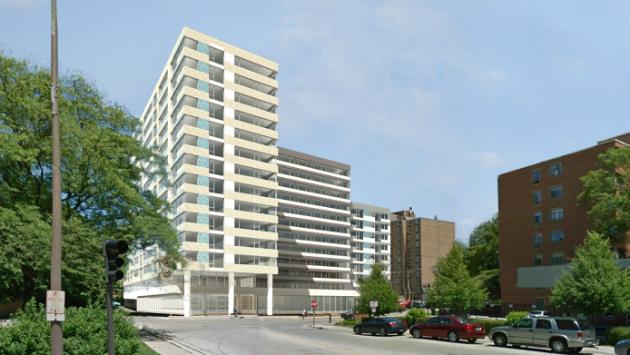 A planned 14-story high rise at 831 Emerson St. in Evanston targeted for occupancy by college students is likely to face a shrinking market of Northwestern students looking for off-campus housing.

NU spokesman Alan Cubbage tells Evanston Now the university is planning to increase its on-campus housing capacity over the next few years, and starting two years from now — in the fall of 2017 — will require both freshman and sophomore students to live on campus. Currently only freshmen are required to live in university housing.

Cubbage says the university's enrollment on the Evanston campus has been stable for years and there are no plans to increase it.

Of about 8,000 NU undergraduate students, roughly 5,000 now live on campus, Cubbage says, either in residents halls or fraternities and sororities.

In addition to its on-campus dorms, NU has a large residence hall for grad students, Englehart Hall, just across the Purple Line tracks from the proposed high rise, at 1915 Maple Ave., and has the McManus Center for graduate business students, at 1725 Orrington Ave.

Cubbage says the university doesn't have a business relationship with developers of the 831 Emerson site, or any other private developer, to build student housing and has no plans to establish one.

We've received no response yet to phone and email messages sent Wednesday afternoon to John Diedrich, Senior Vice President for Investments at developer CA Ventures seeking comment on the project's prospects in light of NU's plans.

During a 1st Ward meeting Tuesday night, Focus Development Director Justin Pelej said the building would be designed to appeal "to a younger demographic, predominantly, but not exclusively, students."

Under state and federal anti-discrimination laws, private landlords can't refuse to rent to people based on their student, or non-student, status.

Some residents had expressed hopes that the E2 development would draw students out of the low-rise residential neighborhood near campus, reducing sometimes stressful relations with older residents of that area.

But Alderman Delores Holmes, whose 5th Ward includes much of that area, said before Wednesday night's Economic Development Committee meeting that she hadn't noticed any reduction in the number of complaints about students living in the area this year as the E2 development leased up.

Pelej says one advantage of having a private developer build student housing, rather than the university, is that the private building will remain on the tax rolls. He claimed the 831 Emerson development would increase property taxes on the property from roughly $250,000 with its current low-rise commercial use, to about $1 million a year.

And, Pelej said in response to a question, the developers are prepared to sign a covenant with the city that would bar them from selling the property to the university or another tax-exempt non-profit.