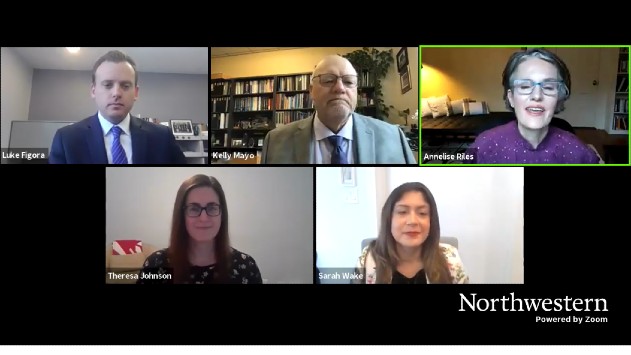 NU administrators participating in a webinar for international students today.

Hundreds of students from China, as well as visiting researchers and professors from that country, may be blocked from attending Northwestern in person this fall. That’s the implication of Trump administration immigration policies as outlined this morning in a University webinar for international students.

Chinese students make up far and away the largest number of international students at NU. There were more than 1,700 attendees from China in 2019-20, four times the number from the next highest nation, India.

The United States has imposed a travel ban on anyone coming from China, Iran, or Brazil. The stated reason is to help block COVID-19 from entering the country, although some critics say there is also a political component in the China and Iran regulations.

“This is not a matter of nationality,” said Annelise Riles, Associate Provost for Global Affairs. Riles said the ban applies to all people trying to enter the U.S from the three countries, whether they are natives of those nations or not.

Chinese, Iranian, or Brazilian students or professors already in the United States are not impacted.

It’s not known yet how many students and visiting scholars will be unable to come to NU in person due to these rules. Riles said that was one reason for today’s webinar, to help international students make up their minds whether to come to Evanston, or learn remotely from their home country.

Not only were the largest number of international students at NU from China in 2019-20, but so were the most visiting researchers and professors, 556, about one-third of all overseas scholars.

The Trump administration’s rules for international students have bounced back and forth since the coronavirus pandemic began in March, making things “particularly stressful” for foreign students and teachers, said Sarah Wake, associate university general counsel.

Earlier this month, the Immigration and Customs Enforcement agency said any international student currently taking only online courses in the U.S. would have to leave the country, or transfer to a school where they could take classes in person. After a firestorm of protests from universities, Northwestern included, ICE backed down and dropped the rule.

However, other pandemic-related rules impact international students and make it more difficult or even impossible to study in the United States.

New international students, as opposed to those already enrolled, cannot come to the U.S. unless they will be taking at least one in-person course.

Unlike many colleges, Northwestern is planning some in-person classes. “We will work with you” to find those classes,” Wake told the international students watching the webinar.

Riley told the students that “you are a critical part of our university.”

“Frankly, we are very disappointed in our government. These policies damage our national interest,” she said. “Let me state clearly,” she added, “we are opposed to these new regulations and restrictions.”

But those regulations and restrictions are a reality. Northwestern, Riles said, is doing its best to keep up. “We frankly do not have all the answers. Things change very quickly,” she said. “We will inform you,” she told the students.

And any additional change could lead to even more uncertainty. If the pandemic gets worse in Illinois, and the state reverts to more restrictions, in person classes could be banned. Then what? Would some international students have to leave, because the in-person component of their education is prohibited?

“The prospect of flying 9,000 miles and then having to go home in a few days is very daunting,” Riles said. “We don’t know what the government will do, ever,” she added. “We recognize how stressful that can be.”

But, Riles told the international students, “we know Northwestern will care for you.”