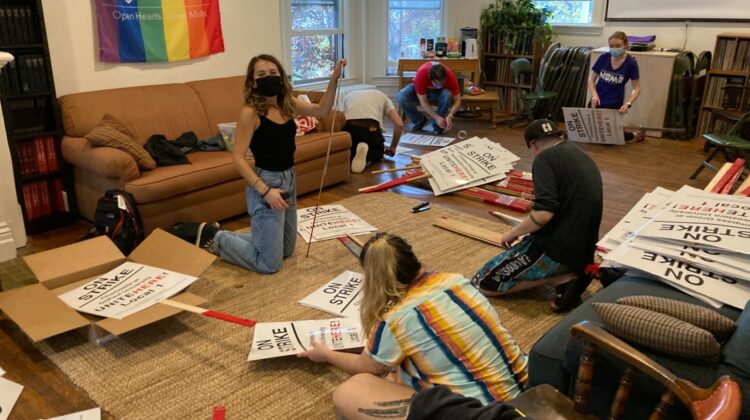 Student volunteers helped put together picket signs Friday afternoon that the workers who cook and serve their meals at Northwestern University may use during a strike.

The students, who stapled bold-lettered “ON STRIKE” signs onto sticks, included members of the University Christian Ministry and Students Organized for Labor Rights.

The union is Unite Here Local 1, which has overwhelmingly authorized a walkout against Compass Group, the international corporation that is the contract provider of food services at NU.

No walkout date has been set, although Dan Abraham of Unite Here told Evanston Now “a strike could come at any time.”

Neva Legallet, an NU junior, was one of about 15 students who helped put together more than 500 picket signs.

Legallet, a member of the labor rights group, said “students are here because we care about workers as part of the community, and we demand that the university treat them as such.”

She said the food service workers are not paid a living wage and also deserve better health insurance benefits.

Unite Here said the average NU food service employee makes less than $28,000 a year, with no raise since 2019 as contract talks have dragged on.

The Rev. Julie Windsor Mitchell, of University Christian Ministry, said “our students believe in putting our faith in action for all people, especially people on the margin.”

An official with Compass Group, Sophia Biamatzis, has previously told Evanston Now that the company’s last offer included an immediate $2 per hour raise, which would increase the average starting salary to $18 per hour. She also said full-time employees do receive health coverage.

Unite Here represents 400 NU food service workers at Northwestern. The student volunteers put together signs for NU and also for similar workers at DePaul, who have also authorized a potential walkout.

The Compass representative has said “we are fully prepared” if the union decides on a job action at Northwestern.

Legallet, of the pro-labor group, said she thinks her fellow NU students “will support workers any way they can” if there is a strike.

No prior notice is required for such a walkout. So if it does indeed take place, those student-made picket signs could appear at any minute.