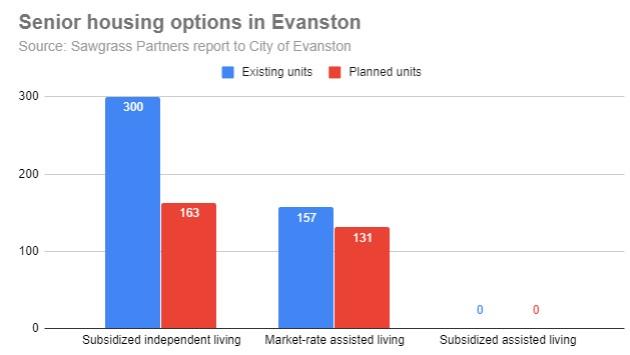 A study presented to Evanston’s Housing and Homelessnes Commission concludes the city has an large unmet need for subsidized assisted living units for seniors.

The study did not assess the supply or demand for market-rate independent living units.

An additional 17 subsidized units are included in the mostly-market-rate Avidor development now under construction at 1727 Oak Ave.

Three proposed developments would also offer subsidized independent living for seniors — 60 units at the CJE/Evergreen Real Estate development at 999 Howard St., 84 units in a new planned building next to the Perlman Apartments and two units in the Centrum Partners 1815 Ridge Ave. development.

If all those additional developments are completed by 2024, the number of subsidized independent living units for seniors in Evanston would increase by more than 50% to a total of 463 units.

The study estimates that by 2024 Evanston will have 3,619 households 55 and over who would meet the income limits for subsidized independent living units. But it did not attempt to assess how many of those residents would choose to live in such units if more were available.

The study identifies the likely prospects for market-rate assisted living units as consisting of persons 75 and older who need assistance with the tasks of daily living and who are living alone and who have household incomes greater than $35,000 if they are renters or greater than $25,000 if they are homeowners.

It concludes 348 Evanston residents fall into that group today and that the number will increase to 396 by 2024.

It says there are a total of 157 market-rate assisted living units in Evanston today at three facilities — The Mather, Three Crowns Park and Westminster Place.

If the long-delayed 1815 Ridge development actually is built, it would add 131 assisted living units.

And if the now-shuttered King Home were redeveloped with 90 assisted-living beds, the available supply would come very close to meeting the anticipated demand.

The study estimates that by 2024 about 30 percent of Evanstonians who meet the rest of the criteria for assisted living won’t qualify because they don’t have enough income. That would amount to a need for roughly 170 subsidized assisted living unts. And the study says there are no such units in Evanston today.

City grants administrator Sarah Flax says the state, which provides funding for and licenses such facilities, has declined to approve any new ones for several years because of a lack of funds.

The study, presented last Thursday, was prepared for the Housing Committee of the city’s now-disbanded Age-Friendly Evanston Task Force and funded by the city and a grant from the Evanston Community Foundation.