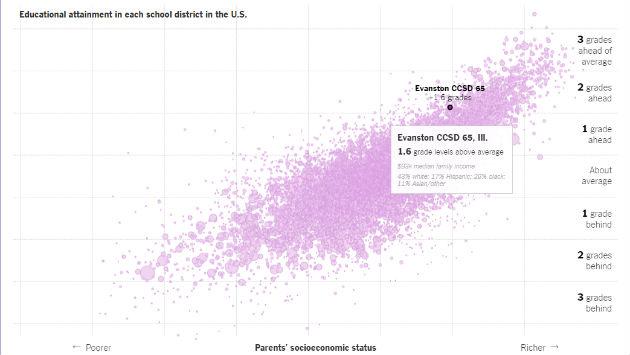 A new study from researchers at Stanford University offers some perspective on the debate over the achievement gap in Evanston schools.

The study, as reported in the New York Times, shows that socioeconomic status plays a huge role in predicting student success, but it also depicts the large disparities in performance nationwide when students are grouped into racial categories.

The report was published just a few days after a marathon District 65 school board meeting on the achievement gap,

One chart (shown above) displaying data from the report shows District 65 students as a whole performing far better than the average for school districts nationwide — with students on average 1.6 years ahead of their grade level. 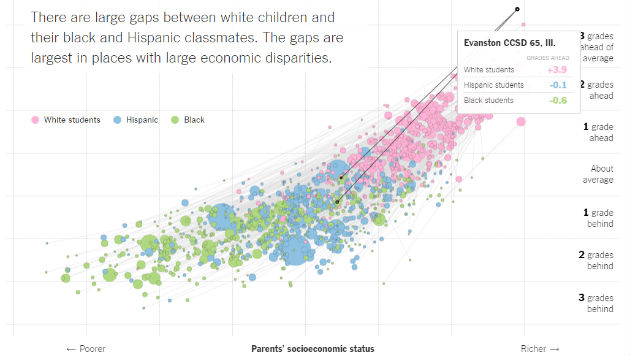 But another chart shows that while white students in Evanston score on average 3.9 grades ahead of the national average for all students — the highest performance reported for whites in any district in the study, Hispanic students score 0.1 grades below the nationwide all-student average and black students are 0.6 grade levels behind.

The chart shows that, in the bulk of districts, white students come, on average, from considerably more well to do families than minority students.

But it can also, in the interactive version on the New York Times site, be used to identify at least one district, Woodridge Township, New Jersey, where minority students from families whose wealth on average matches the wealth of minority students in Evanston are performing better than minority students do here (white +1.8, Hispanic +0.6, black +0.5).

It also identifies at least one other district, in Frisco, Texas, where, perhaps as a result of higher income levels, minority students are doing even better (white +2.2, Hispanic +1.1, black +0.7).