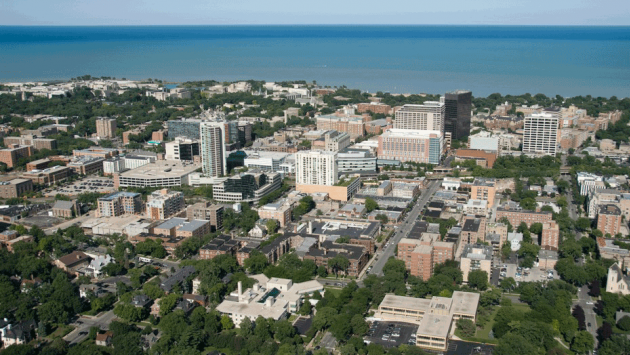 A new study by the National Community Reinvestment Coalition found substantial levels of gentrification in many big city neighborhoods, but concluded there was no area of Evanston that is experiencing gentrification.

That’s in part because only one Evanston census tract met the study‘s threshold standards for being capable of being gentrified — that the median household income and median home values in the neighborhood in 2000 were in the lower 40 percent for each value in the Chicago metro area.

The one part of Evanston the study says could gentrify is census tract 8102 on the south edge of Evanston, bounded by Howard Street, Asbury Avenue, Oakton Street and the CTA tracks.

Those figures, from the U.S. Census and the American Community Survey, are inflation-adjusted to be comparable to estimated values in 2013. And far from seeing rising values, by 2013 home values in tract 8102 had slumped to $177,300, and median household incomes had dropped to $55,123.

By contrast, the study found hundreds of neighborhoods in the City of Chicago which met the criteria for being capable of being gentrified and 26 where gentrification had actually happened during the period from 2000 to 2013.

The NCRC study looked at three factors in determining whether gentrification had taken place — increases in education levels, home values and income.

By contrast, in Evanston, across all neighborhoods, home values increased 11 percent, median household income declined 14 percent and the share of residents with bachelor’s degrees increased 19 percent, to 73 percent of all residents.

In the period studied by NCRC most new construction in Evanston happened downtown and along the Chicago Avenue corridor.

Despite claims that new construction would gentrify those neighborhoods, here’s what the NCRC data shows:

Most new condos constructed during the period, while not cheap on a square-footage basis, were considerably less expensive than many large, older single-family homes already in those neighborhoods close to the lakefront.

Of course, the absense of gentrification doesn’t mean that housing in Evanston is affordable to everyone.

The Illinois Housing Development Authority reported in January that it considers 17.5 percent of housing in Evanston to be affordable, an increase over earlier this decade and by far the best for any Cook County community with lake frontage, but only about average for all 31 northern Cook County communities.