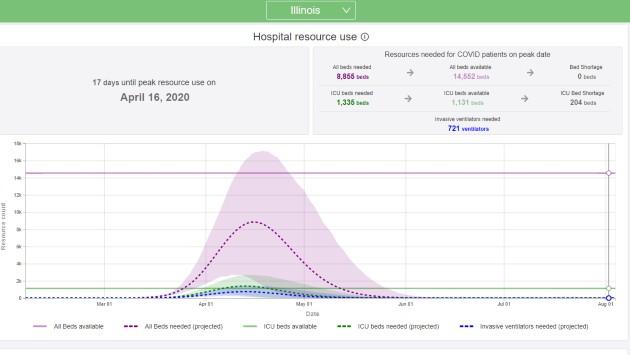 Researchers at the University of Washington project that the peak demand for hospital resources in Illinois during the COVID-19 pandemic will arrive on April 16 and that 91 people will die that day.

The study, from the Institute for Health Metrics and Evaluation, looked at available health resources and anticipated demand for services across all 50 states, adjusted based on case levels and deaths through last Tuesday and on when each state put in place various social distancing measures.

The analysis concludes that Illinois will have a sufficent number of hospital beds but will fall short by about 15 percent on the number of intensive care unit beds needed.

The study assumes the continuation of strong social distancing measures and other protective efforts, but still forecasts that deaths in Illinois from the novel coronavirus will total 2,454 by Aug. 4.

The Institute for Health Metrics and Evaluation has received substantial funding from the Bill and Melinda Gates Foundation.

Asked about the study at his news conference this afternoon, Gov. J.B. Pritzker said Illinois has used the University of Washington study as a source in doing its own modeling of the crisis.

“Its fair to say that most of the models I’ve seen show that we’ll be peaking sometime in April in Illinois,” Pritzker said. “We’re not yet close to that. We still have weeks to go.”

While the study projects that Illinois most likely will not run out of hospital beds, it also includes a wide range of other potential outcomes. The most extreme of those on the high end show the state needing roughly twice as many hospital beds as are currently available.

It also projects far more dire circumstances for some other states — including New York, which, in the most likely scenario, is seen peaking on April 6 with only a third of the hospital beds it needs and 10,243 deaths by Aug. 4.

Here’s a dynamically updated display of national and state-level data from the study.