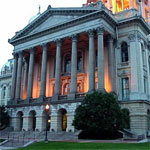 SPRINGFIELD — Two health-care advocacy groups are predicting thousands of job losses and billions of dollars in economic damage to Illinois, if Gov. Pat Quinn's plan to achieve $2.7 billion in savings from the Medicaid program is implemented.

SPRINGFIELD — Two health-care advocacy groups are predicting thousands of job losses and billions of dollars in economic damage to Illinois, if Gov. Pat Quinn's plan to achieve $2.7 billion in savings from the Medicaid program is implemented.

Quinn's plan would jeopardize 25,615 jobs and cost the state's economy $3.2 billion, according to a report released Wednesday by the Illinois Hospital Association, which lobbies for the state's hospitals, and the Campaign for Better Health Care, an organization that advocates for health-care access

Quinn's proposal reduces the amount Medicaid providers get paid by $675 million, accounting for 25 percent of the $2.7 billion in savings.

Nearly every dollar of the $6.6 billion the state spends on Medicaid goes to providers. Cutting provider reimbursement's by $675 million translates into an across the board rate reduction of 7 percent to 9 percent for providers, according to Quinn spokeswoman Brie Callahan.

Callahan said that in the end it wouldn't be a blanket rate cut. Some providers would see rates reduced by more than 9 percent, while others might avoid a rate cut all together.

"That still is something that's being worked out," Callahan said.

"These are tough choices, but the reality is that (the) entire Medicaid system will collapse, which would be far worse, if we do nothing," Quinn spokeswoman Brooke Anderson wrote in an email.

Anderson pointed out that Quinn's plan actually doesn't seek $2.7 billion in cuts to the Medicaid program. Instead, it calls for:

The tax hike is expected to yield $337.5 million, plus a federal match of $337.5 million for that tax increase, all of which would cover the rising cost of Medicaid, according to Quinn's office.

Jim Duffett, executive director for the Campaign for Better Health Care, said the specifics of the cuts aren't important, because any cut to Medicaid is harmful to the populace and economy.

Duffett and Wurth said the state needs to find savings through efficiencies in health-care delivery and administration and making sure only people eligible for Medicaid receive Medicaid. They also said they agree with Quinn's cigarette tax hike.

Quinn said increasing the cigarette tax would get people to quit smoking, which would lower the cost of health care.

"Why wouldn't we want to use that public health strategy?" Quinn asked Wednesday during an editorial board meeting with the Springfield State Journal-Register.

But opponents of the cigarette tax increase say that raising the price of cigarettes in Illinois would drive people to buy their cigarettes elsewhere.

William Fleischli, executive vice president for the Illinois Petroleum Marketers Association and Illinois Association of Convenience Stores, both of which lobby for gas stations, said elsewhere would include the Internet.

The General Assembly must approve this tax hike, and Republican House and Senate members oppose any tax increase. They instead call for more program cuts.

No legislation for Quinn's cigarette tax increase or any other of his $2.7 billion Medicaid savings plan have been introduced as legislation.