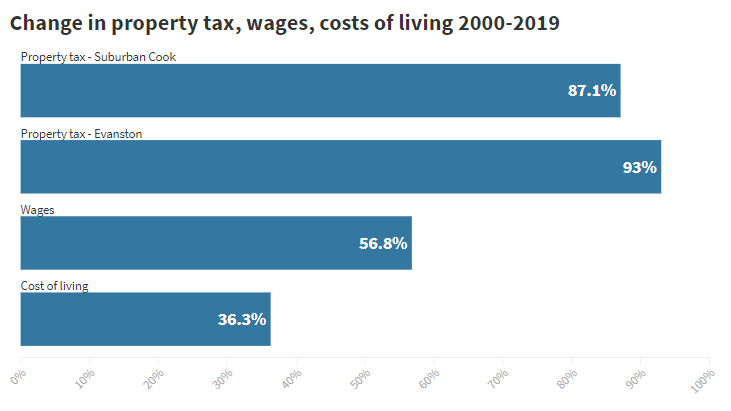 The study says Evanston’s property tax rate increased 93% during that period — more than the average for suburban Cook County — and far exceeded the 56.8% growth in wages or the 36.3% cost of living increase.

The study says property taxes in Skokie have increased 89% in the same period while they’ve gone up by 109% in Wilmette.

The report also lets taxpayers look back at what the property tax bill was for their home in 2000 and compare it with the current bill and to determine what the average property tax increase was during the period for any suburban municipality or any of Chicago’s wards.

The report does not break out the change in tax bills for individual government bodies. Many of those agencies, like school districts, are limited by tax cap legislation to increases at the rate of inflation unless they seek voter approval for an increase. But others, including home-rule municipalities like Evanston, are not subject to such constraints.

Evanston is proposing a 5.9% increase in its property tax levy in its 2021 budget that’s up for City Council debate tonight.