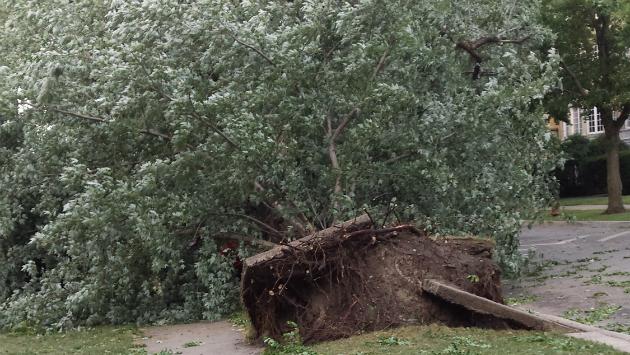 About 1,500 ComEd customers are without power after Evanston was hit with what city officials describe as a severe microburst of rain and hail just before 3 p.m. today.

City Manager Wally Bobkiewicz says three people attending the Lakefront arts Festival at Dawes Park were struck by a tree branch during the storm. All three were transported to Evanston Hospital with minor injuries.

Trees were reported down through the City. One tree caught fire on Warren Street and was quickly extinguished by firefighters.

The Fire Department received over 80 calls just after the storm hit reporting power outages and trees down. Public Works Forestry and Street Maintenance Division staff have been called in to handle service requests.

Most of the power outages are south of Dempster Street and north of Oakton and from Ridge Avenue west to the city limits. Traffic signals are out in some of those areas.

No other injuries or major damage has been reported.

Update 7:20 p.m.: ComEd has gradually been restoring power to the affected customers but says it may take until Wednesday to restore power to nearly 400 customers in the area just east of James Park.

Update 9:12 p.m.: ComEd is now saying crews hope to have power back to that area east of James Park by 6 a.m. Monday.

City forestry crews worked until nightfall cleaning up after about 20 large trees that were knocked down or are severely damaged. That work is expected to continue tomorrow.

Update 9;45 p.m.: City officials now say that at its peak, nearly 2,000 ComEd customers in Evanston were without power this afternoon. That number now has been cut to about 1,650.