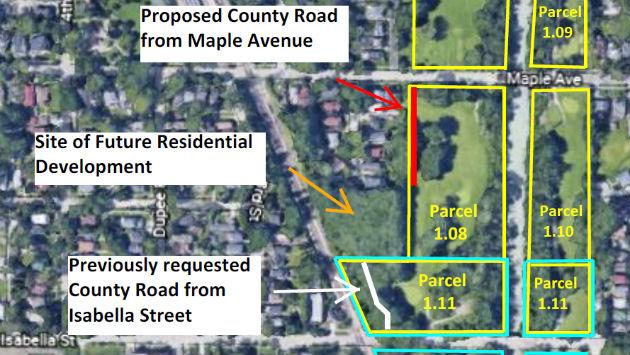 County Commissioner Larry Suffredin says the county will provide environmental protections for a planned road across a portion of the Canal Shores Golf Course that the Metropolitan Water Reclamation District board approved Thursday.

Suffredin says he’s disappointed that the board approved the easement, sought by developer Joe Keefe to gain access to landlocked property he owns between the golf course and the CTA Purple Line tracks.

Golf course supporters have argued that the new road would effectively destroy the 10th hole of the golf course. And they’ve claimed that the road would cost county taxpayers $700,000 to build.

An MWRD aerial map with the dimensions of the proposed easement highlighted.

He also said that all building and zoning requirements of the Village of Wilmette would have to be satisfied before the County Board acts on the project.

The MWRD board approved the easement on a 5-4 vote. Member Debra Shore, who was on the losing side of the vote, said it would set a dangerous precedent, letting a private property owner use public land at public expense.

However a legal principle called easement by necessity may, under certain circumstances, give a landlocked property owner the right to compell an adjoining property owner to grant access across his property to the nearest public road.

A section of a map from the Canal Shores website showing the course layout near the 10th hole.

Keefe previously sought approval for an easement across MWRD land just north of Isabella Street in Evanston. That path would have avoided the golf course property but was rejected by Evanston officials because it crossed what was described as environmentally sensitive land.

After the MWRD vote Thursday a Wilmette park board member said he’d recommend that the park board sue to block the easement. The park board leases the land from the MWRD and in turn subleases it to the golf course.

Two years ago the MWRD ended up paying $44 million to settle a lawsuit that arose after the district attempted to block access across an easement adjacent to its downtown Chicago headquarters building.