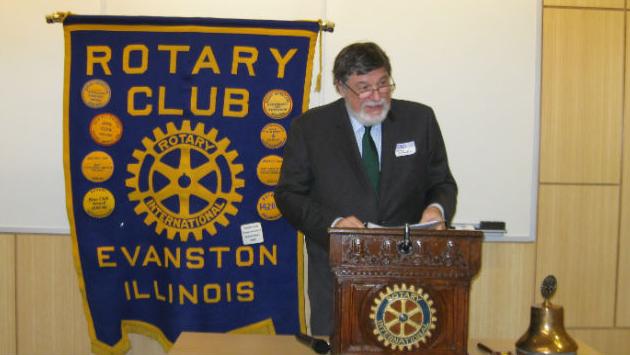 Cook County Commissioner Larry Suffredin of Evanston told Rotarians Thursday that we are entering the era of women in politics.

He was the featured speaker at the regular weekly meeting of the Rotary Club of Evanston.

Noting the number of women who were running and winning in Tuesday’s primary election, Suffredin, who lives in the 6th Ward, noted that he lost to Anita Alvarez in the Democratic primary of 2008, when she went on to win the election in November of that year for Cook County state’s attorney.

This year, Alvarez faced two women opponents in her quest for re-election and lost to Kim Foxx.

Meanwhile, Hillary Clinton is on track, he said, to win the Democratic nomination for president.

He recalled his first meeting with Hillary Clinton at the Levy Center in Evanston when she was first lady of Arkansas and her husband, Bill, was governor of that state.

“I could only remember that her name began with an ‘H,’” he said, “and I introduced her to everyone as Heather.”

Noting the success of Tammy Duckworth in her quest to unseat Mark Kirk as U.S. senator from Illinois, Suffredin said, “the women is where this country is heading .”

Suffredin said it is unlikely that either Sen. Ted Cruz (R-Tex.) or Ohio Gov. John Kasich can stop Donald Trump from securing the Republican nomination for President, but he said it will be “interesting” to see who he will select as his running mate.

Suffredin said he cannot predict who Clinton will pick as her running mate, but said he likes Sen. Elizabeth Warren (D-Mass.) When questioned after his talk, Suffredin agreed that the country is probably not yet ready for two women on the presidential ticket.

On the state level, Suffredin noted that Gov. Bruce Rauner-endorsed candidates for key offices in state races were defeated, but said that because the nearest Republican legislator to Evanston is in Palatine, Evanston has little clout with the Republican governor in Springfield.

Because of the deadlock between Gov. Rauner and Democratic House leader Michael Madigan, Suffredin predicted that the state will not have a budget before the November election

Locally, Suffredin said that in this week's primary, he was struck by the lack of yard signs in Evanston in support of various candidates.

But he added: “Women beat male opponents in every race.”