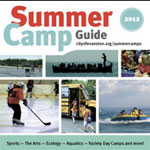 Even  though there’s still snow to be found on the ground in Evanston, it’s not too early to begin thinking about summer camp. Registrations can be mailed to the city starting Feb. 3.

New camps this year among the more than 50 offered are Aqua Golf Adventures Mini-Camp, Young People's Short Film Project for ages 11-15, and a Time Travelers Arts Mini-Camp. This year's theme for the historical immersion Arts Mini-Camp, which is held in August, will be the Victorian era.

As in previous years, the Recreation Division offers a Parent-Child AquaAction Camp and an Adult Aquatic Adventures Camp, so grown-ups can have fun, too.

To keep the process fair, registrations must be sent via first-class U.S. mail no sooner than Friday, February 3. Priority will be given based solely on the date of the postmark.

Registration forms sent by any other means, including priority mail or special delivery, as well as those postmarked prior to February 3, will be held for processing at a later date. Phone-in, walk-in, and online registration begins at 11 a.m. on Monday, February 20, for residents and nonresidents alike.

The 2012 Summer Camp guide, which describes each camp in detail and the registration procedures, is available at the Civic Center and at all community centers. The full guide can also be found online.