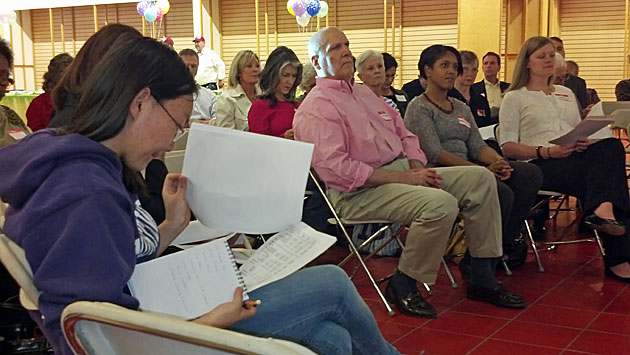 City officials say this summers paving project on Church Street downtown will be a bit of a grind for Evanston's sidewalk cafes.

Suzette Robinson, the city's public works director, told Downtown Evanston's annual meeting Thursday that the project will require pavement grinding in two-block stretches at a time through the downtown area.

"At some point there will be dust, and that won't be conducive to outdoor dining," Robinson said.

But she said the city will have a worker from the engineering staff on scene throughout the paving project, and showed off a photo of engineer Jon Nero in his florescent yellow vest — to show the assembled merchants how to spot him in the field.

"He can help with your needs during the project," Robinson said.

The Church Street project will include a protected bike lane — separated from the rest of the roadway by plastic markers that can be removed during the winter months to clear the way for snow plows.

After someone in the audience noted that the bike path is designed only to provide one-way traffic — into downtown from the west, Robinson said the outbound bike lane, using Davis Street, is on the city's construcion roadmap for 2013.

The road work is scheduled to run from August 1 to mid-October, and Downtown Evanston has rescheduled its "It's Thursday, Let's Dance" concert series to start earlier in the season to avoid the construction work, the group's executive director, Carolyn Dellutri, said. 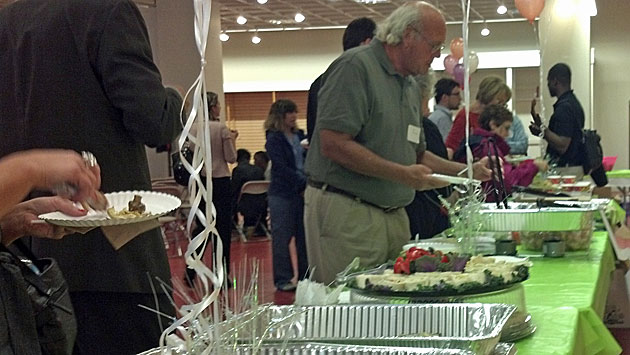 Top: Downtown merchants and residents get the pitch about summer paving work. Above: Food from local restraunts helped draw people to the meeting, held in the vacant former Pier One store at 1612 Sherman Ave.

The project will also replace the increasingly uneven brick sidewalks along Church with concrete and add new street furniture, including pedestrian-level lighting and a covered bike rack between Sherman and Orrington Avenues.

Looking further ahead, Dellutri said that this year the holiday tree lighting ceremony, typically held on the Tuesday before Thanksgiving, will be moved to the preceding Friday, Nov. 16, and combined with a holiday shopping promotion that will see downtown stores open longer hours with entertainment in the shops and carolers on the street.